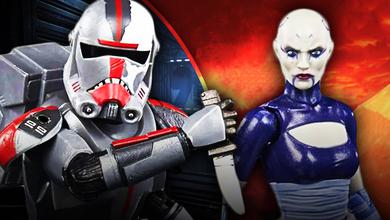 The Star Wars Black Series from Hasbro is one of the most popular lineups of merchandise that comes from the galaxy far, far away, bringing high quality and highly detailed figures based on some of the franchise's most popular characters.

Most recently, a set of figures was announced based on the first season of The Mandalorian, molding Din Djarin, Cara Dune, IG-11, and others in plastic. An alternate Mando donning his Beskar armor was also revealed, which comes bundled with a Baby Yoda figurine.

Aside from the widely popular Disney+ series, Hasbro has gone back into the Star Wars archives to cherry pick new figures. The toy company announced figures based on Jar Jar Binks, Boba Fett, and even Dark Rey from The Rise of Skywalker. The Black Series hasn't stopped at just the films and the television series either, with figures based on Star Wars: Knights of the Old Republic also being released.

A new line of figures from Star Wars: The Clone Wars has been revealed, bringing together new and old characters from the animated series...

Hasbro unveiled a new line of Star Wars Black Series figures based on Star Wars: The Clone Wars. This series of 6-inch figures includes Asajj Ventress and two members of the Bad Batch, and will officially release in June 2021. The figures are up for pre-order now.

The first of the line is Hunter from the Bad Batch, who was introduced in season 7 of The Clone Wars. The figure comes with a variety of accessories, including an alternate head without the Clone Trooper helmet.

Crosshair is another member of the Bad Batch available as a Black Series figure. Like his brother, he comes with multiple accessories for different blasters, in addition to an alternate head.

Last but not least is Asajj Ventress, the only figure from this line not to be from the final season of The Clone Wars. Ventress comes packed with her iconic dual lightsabers as accessories.

The three figures can also be pre-ordered together as a three-pack bundle, which is available here.

As always, Hasbro's Black Series manages to pack a vast amount of detail into its products, and this lineup is no different. The Bad Batch figures possess a nice amount of texture to replicate their armor in the series, adapting their designs perfectly for their toy form. Asajj Ventress also receives a fabric dress piece, adding to the realism of the figure beyond using a standard piece of plastic.

Whether the other Bad Batch members, like Tech, Wrecker, or Echo, will find themselves as Black Series figures remains to be seen. However, given that Star Wars: The Bad Batch is on the way, it wouldn't be surprising for the other members to find themselves in toy form at some point down the line.

Ultimately, these are fantastic figures all around and, for those looking to celebrate their favorite character from The Clone Wars past or to prepare for upcoming series, these will certainly be worth picking up.