Marvel Studios' Phase 4 of the MCU is unlike anything fans have seen from the comic book movie giant before.

In addition to two already released theatrical films, along with Eternals and Spider-Man: No Way Home on the way, Marvel has also introduced their own Disney+ series. This started with the awards darling WandaVision, and most recently, their first animated Disney+ series What If...? concluded its run.

In keeping with Phase 4's multiversal theme, Season 1 of What If...? explored alternate timelines within the Marvel multiverse, culminating in an epic finale where all universes were at risk from a singular threat.

For the climactic "What If...The Watcher Broke His Oath," the Watcher plucked characters from past episodes to defeat the Infinity Stone-powered Ultron with the exception of Gamora.

In fact, she, along with Tony Stark sporting an unusual choice of a suit, hadn't been seen in the series at all; and naturally, fans are asking why.

In the What If...? Season 1 finale, the Watcher interrupts a conversation between Gamora, who's wearing Thanos' armor, and Tony Stark in what appeared to be a Sakaarian-inspired Hulkbuster suit.

While Stark is left behind, Gamora joins the likes of What If...?'s alternate versions of Erik Killmonger, Party Thor, T'Challa as Starlord, Captain Carter, and more. 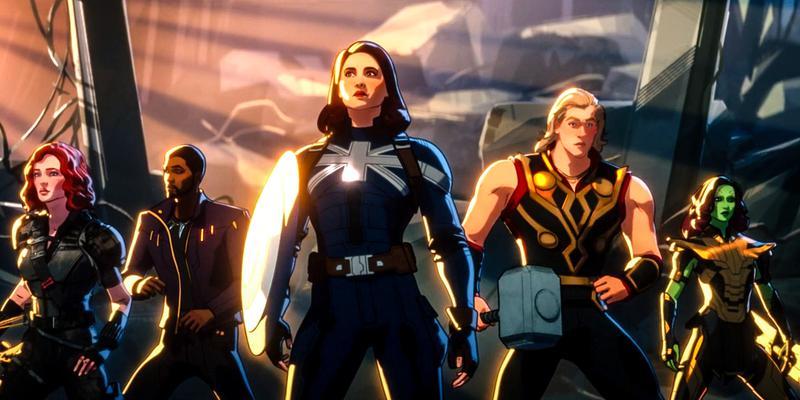 Again, Gamora is the only member of this multiversal crew who didn't receive her own alternate tale; although, according to the show's writer A.C. Bradley, that wasn't the original plan.

Even though Marvel Studios has been able to release an impressive volume of content this year, COVID-19 shutdowns and delays did have an impact on the series, resulting in "another comedy episode" for Season 1 being pushed to Season 2.

Considering Gamora and Tony Stark's role in the finale, it looks like that comedy episode would've involved these two who, interestingly enough, had never interacted with one another in the prime MCU timeline.

There is additional evidence to support this idea that also explains a bit more about the Gamora and Tony of this What If...? alternate timeline.

Ahead of the show's release on Disney+, there were rumors about a storyline involving the Daughter of Thanos hunting the genius billionaire. Also, a concept art leak actually showed Gamora wearing the Mad Titan's armor and wielding his weapon of choice, just as audiences saw her do in the show's most recent episode.

This concept art also showed a Hulkbuster Iron Man suit made from Sakaarian scrap metal; and in the finale, the Watcher referenced the duo's Sakaar-related past, referring to Gamora as a "survivor of Sakaar, and destroyer of Thanos" while Stark is seen in a bulky suit bearing Sakaarian markings.

In addition, a leaked LEGO set for What If...? discovered ahead of the show's release featured Tony Stark and his Hulkbuster suit on the Thor: Raganrok planet of Sakaar.

Surprisingly, the set showed that Stark's Hulkbuster suit would've been converted into a car during the episode.

Also, while figures for the Watcher and Valkyrie were included in the set, there was no Gamora. Perhaps in this alternate version of Thor: Ragnarok, she was Tony's friend from work and the Grandmaster's champion?

Either way, this LEGO set supports the theory that Gamora and Tony's story was the comedic story that was bumped to next season.

In a 2019 interview, the iconic Jeff Goldblum, who reprised his role as the Grandmaster for the show, let it slip that he recorded dialogue for an episode of What If...? that involved Tony Stark. Surely, an exchange or two between Stark's Iron Man and Goldblum's Grandmaster will be nothing less than entertaining.

Due to Marvel's usual brand of secrecy, it's unusual for fans to know so much about a storyline that hasn't been seen; although, that doesn't mean there aren't questions.

For instance, while audiences know little about this version of Gamora apart from surviving Sakaar or killing Thanos. There's also the question of why she went from hunting Tony Stark to working with him.

Also, now that both her and Tony's stories have been moved to Season 2, the obvious question is how that decision will impact the show's sophomore season?

One possibility is that Stark may initiate the multiverse's next big threat since, in the recent episode, he and Gamora are shown on Nidavellier with Eitri, the same location from Avengers: Infinity War where Thor obtains Stormbreaker.

While seemingly melting down Thanos' Infinity Gauntlet, Stark echoes a line from Avengers: Age of Ultron that led to the creation of Ultron, saying, "But how do we put a suit of armor around the world? Hmm? Around the galaxy?"

Even in this alternate timeline, he's still thinking dangerously; but this time, he has cosmic resources at his disposal.

If he is expected to build another Ultron, this could be why What If...?'s creators greenlit the idea of moving this storyline to the show's Season 2 as it could seamlessly connect both seasons of Marvel's multiversal animated series.

All Season 1 episodes of What If...? are streaming on Disney+.

Guardians of the Galaxy Vol. 3 Is Reportedly a 'Masterpiece'