Fans are eagerly awaiting Zack Snyder's cut of Justice League as they've gotten more and more news about what changes will be happening in his cut and what will be restored . But, a stunt double for Gal Gadot posting an inconsequential behind-the-scenes photo of herself on the set of Justice League has gotten fans believing that there were changes even more ridiculous than Henry Cavill's infamous mustache...

However, when asked about whether or not she actually performed in these scenes or if it was for the sake of having a lighting reference for the scene, she replied that it was the latter: 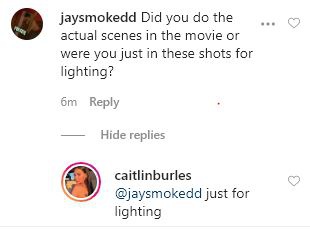 A tweet is beginning to circulate that says Caitlin Burles performed in the scenes and had Gal Gadot's face CG'd onto hers afterwards:

BTS images from Josstice League of #WonderWoman stunt double Caitlin Burles vs the scenes we got in the theatrical cut with Gal Gadot's face CGI'd on. SOURCE | https://t.co/M6XCsJOFrI pic.twitter.com/51ePccMUfT

This idea is a tad difficult to accept. This is the same studio that had trouble removing a simple mustache from Henry Cavill's face in many scenes, yet was able to replicate Gadot's entire face perfectly and without anyone noticing until now.

However, it is easy to understand how this misconception could have happened since it is very apparent in the movie that, at one point, Gal Gadot wasn't present for a scene. Specifically, the gag in which Barry falls face-first onto Wonder Woman's chest. In it, Gadot's face is conscientiously absent from view, which has lead to the common assumption that Gadot was either unwilling to perform in the scene and that Joss Whedon had a double in her place. It doesn't help that Joss Whedon has recently been accused of being abusive on the set of Justice League by actor Ray Fisher.

It'll be interesting to see if, for the scenes that Caitlin Burles showed, fans will see any significant differences visually, or if these scenes will be in the final cut at all.

She-Hulk Actress Speaks Out on Criticism About Her Hero's Muscles