Now that Zack Snyder's Justice League has been confirmed to launch on HBO Max in the near future, fans are clamoring to find out more details about the new cut. After Snyder stepped away from the film during post-production, Warner Bros. brought in Avengers director Joss Whedon to finish the film, resulting in a radically different version to Snyder's original vision.

After years of fan-campaigning, Snyder has now been given the chance to complete his version of the film which is so far rumored to include Iris West, Green Lantern and super-villain Darkseid. With millions of dollars being put towards the Snyder cut to finish new visuals and post-production on previously cut scenes, there's a whole range of things that Snyder is planning to change in his Justice League .

A Reddit post showing a response Snyder made on his VERO account to a fan question has revealed that he plans to change the infamous Red Sky of the third act in Justice League . 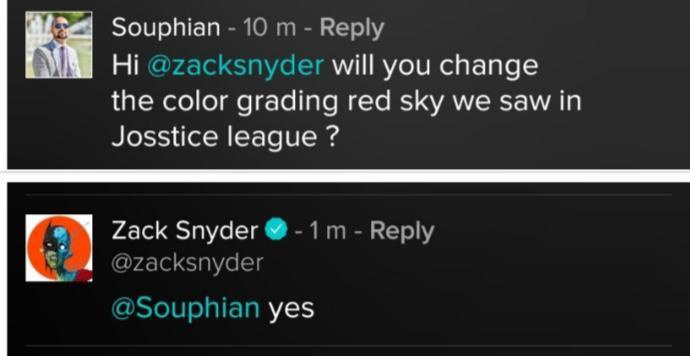 When initial trailers were released for Justice League in 2017, fans began to notice the color palette changing with each trailer . Most noticeable was the red sky that appeared in the final battle between the team and Steppenwolf. At the time, it wasn't too clear who was responsible for the Red Sky decision as it occurred in editing after Snyder left the production. But now with Snyder confirming he will remove the Red Sky in the final battle, it was likely created for Whedon's vision.

It's still slightly unclear why the red skies were necessary in the Whedon cut of the film. Traditionally in DC Comics, red skies can signal the iconic Crisis storyline, which is possibly something that Justice League was planning to set up. Steppenwolf was also attempting to remake Earth, so the red sky did add to the apocalypse atmosphere.

It could also relate to the idea of the villains attempting to terraform the Earth, which is something Darkseid is known for. But seeing as there were no red skies when Zod did this in Snyder's Man of Steel , it's obviously not something Snyder was intending to use. Whatever the decision behind the color grading in Justice League it seems Snyder is determined to get his way with it in his Sndyer Cut.