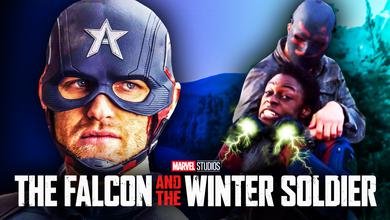 With The Falcon and the Winter Soldier having to a close and fans now looking to the next entry in the Marvel Cinematic Universe, a flurry of interesting details and tidbits have emerged about the show's production.

Many fans have analyzed the show and found subtext that points towards a romance between Sam and Bucky, which leading actor Sebastian Stan has now addressed himself. Whatever the case, the MCU star is happy to continue portraying the Winter Soldier as long as Marvel Studios keeps calling.

Head writer Malcolm Spellman also revealed that there was an internal discussion as to whether Isaiah Bradley would salute his Smithsonian statue or not. There were plenty other possibilities that were dropped in the writer's room too, with Sam Wilson's comic book ability to speak to birds being considered as a part of his MCU powerset at one point.

Now a new video has emerged that reveals a full action sequence that didn't quite make it into the final show...

Dave Macomber, who worked as a fight and stunt coordinator for The Falcon and the Winter Soldier, shared a pre-visualization video for a deleted fight scene to his social media. The action sequence shows an alternate version of John Walker, Lemar Hoskins, Sam Wilson, and Bucky Barnes versus the Flag Smashers, following Walker taking the Super Soldier serum.

As revealed by the Instagram caption, this fight was intended to take place in Puerto Rico prior to the series' production deciding against using the location. The description also reveals that Lemar would have used electrified gloves in the scene, which were omitted from the final version of the series:

Here’s another might have been version of the Flagsmasher Battle — designed for the top floor of a parking structure in Puerto Rico that we scouted but never filmed at due to earthquakes scrapping the location. Lemar got some action in this, using some electrified gloves that never came to be.

This scene plays out quite differently to the similar sequence seen in "The Whole World is Watching," featuring a variety of distinct stunts and an interesting direction for John Walker.

The most notable change is the new weapons used by Battlestar, who wields dual electrified gloves in the video. While no visual indicators are used for his new equipment, one moment seemingly shows a piece of wreckage damaging Lemar's gloves to prevent them from further use. With the gloves being present in this sequence, it is possible that Battlestar's other stunts could have played out slightly differently in The Falcon and the Winter Soldier had he kept his ability to zap opponents.

Lemar Hoskins also seems a lot more agile here compared to the final episode, weaving through his adversaries and using his environment to his advantage.

John Walker's attitude contrasts greatly to Wyatt Russell's performance in Episode 4, with the soon-to-be U.S. Agent clearly reveling in his newfound strength. It seems that Walker's ego and bravado was much more amplified at one point in development, but ultimately muted in order to make put the character in more of a moral gray area.

All episodes of The Falcon and the Winter Soldier are streaming now on Disney+.