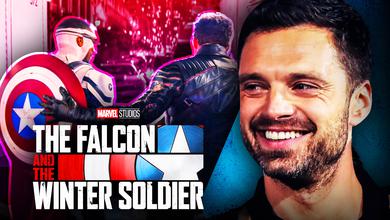 With The Falcon and the Winter Soldier having come to a close, fans now look to where the show's characters could go in the future.

Bucky Barnes' newfound freedom lends itself "to a lot of possibilities" for his future appearances, according to the show's creator Malcolm Spellman.

Spellman even teased a possible romance been Bucky and Sarah Wilson, saying the development process of their relationship "took up a lot of hours in the writing realm." Whatever Marvel Studios has planned for the Winter Soldier, Sebastian Stan will be there as he is happy to continue the role "as long as [Marvel will] keep calling."

While some aspects of the characters have been set in stone like Sam Wilson's new status as Captain America, other matters have been left unresolved.

Many fans have interpreted Sam and Bucky's relationship to be a romantic one, leading star Sebastian Stan has given his take on the situation...

POTENTIAL ROMANCE BETWEEN BUCKY AND SAM?

In an interview on the Just for Variety podcast, Sebastian Stan discussed the potential implications of a romance between Bucky Barnes and Sam Wilson in The Falcon and the Winter Soldier.

Stan mentioned that the decision was not his to make, but that his intention was to be "as honest as [he] possibly" could when playing the role:

"My goal has always been to do...with this role, with that relationship, with anything I've approached to just...be as honest as I possibly I can and then the rest is not up to me."

The Winter Soldier actor mentioned that he was acting as a "messenger" for the intentions of the writers, though did elaborate on his interpretation on Sam and Bucky's relationship:

"I'm just the actor, I'm not the writer...and I'm certainly not the creator here, y'know, I'm sort of the messenger if you will. So if there are intentions or not or whatever, I would be asking the writers to be honest, but y'know I've always approached that relationship as being very close and one of family...and those characters are very interlinked because they are the only thing they have to remind them of a past that no longer exists."

Sebastian Stan continued by discussing what the duo had been through together, but did state that their journey is one of "love:"

"The truth was that these guys are actually experiencing something extremely traumatic, if you're actually looking at the truth of their experience and you're taking away all the glitter and the glamor of a superhero...You're talking about two people that are like entirely ripped from a world, thrown into another and are just doing their best to make the right decisions and all they have is each other...And that journey is what it is, y'know. But is it love? For sure it's love. However you wanna define that love is up to."

When asked whether Bucky was bisexual, Stan pointed to asking the fans for their interpretations of the series and to "let 'em have it." Stan continued to say that it "belongs to [the fans] now," noting that he doesn't think about the potential implications as he "[has] no control over that." Ultimately, the Bucky Barnes actor wants to "let it be:"

"In a way...even talking about it feels like kinda...cheap, y'know like, why talk about it? Like why don't we just let it be what it is, y'know, and let it be, let it be all of these things...The magic of it to me is that it can be anything you want it to be. So I feel like let's let live how it will and how you want it, you know what I mean?"

At the end of the day, Stan says that he's "just happy that the relationship is embraced, and it should be embraced in whatever way or fashion that people desire and want it to be."

MANY POSSIBILITIES FOR THE WINTER SOLDIER

It seems that Sebastian Stan is quite content with wherever the fans want to take Bucky Barnes, with all interpretations of his portrayal being completely valid.

Whether Sam and Bucky's relationship is being read as a strong and positive male friendship or the blossoming of a romance down the road, there is no wrong answer according to Stan and there are plenty of possibilities for the MCU to explore.

With Bucky's love life being somewhat explored in The Falcon and the Winter Soldier through waitress Leah and Sarah Wilson, perhaps this could be further developed through a romance with his fighting partner. Stan mentioned that Sam and Bucky's relationship is built on love, so it will be interesting to see what kind of love Marvel Studios chooses to pursue.

All six episodes of The Falcon and the Winter Soldier are now streaming on Disney+.