It seems like Warner Bros. just can't catch a break these days. The company's recent history has been more than tumultuous, with stories like Batgirl's sudden cancelation and Ezra Miller's streak of troubling behavior seeming to take up all the oxygen when it comes to the studio's superhero division.

On the corporate side, things are more than unstable. A recent prospective hire for the job of DC Film and TV head recently slipped through the company's fingers, keeping a coherent vision for the brand out of reach. Additionally, even with a Discovery merger still fresh, WB may be in for another sale sooner than later.

All of these executive-level decisions have had real consequences for fans, with this nowhere more clear than in the previously mentioned case of Batgirl. Even if any kind of official release seems unlikely, fan interest still seems palpable, with a project over at Corridor Digital offering a look at what the film could've been like.

However, fans still interested in Batgirl may still be able to get a peek at the film itself, even if it's via a much less official or complete capacity.

Batgirl Sequence Makes It Out Into the Open

Even with Batgirl canceled, footage has managed to leak out from the film's production. Ivory Aquino, the actress set to star as Alysia Yeoh, Barbara Gordon's best friend in the comics, recently shared a video of a stunt from the film.

In the clip, Leslie Grace's stunt double, Emely Cartagena, crashes into what appears to be a party, bursting through a ceiling window and using a Christmas tree to cushion her descent.

Batgirl is shown dropping from the window frame and subsequently grabbing onto a bright red Christmas tree for dear life, riding it down a great distance to the floor. 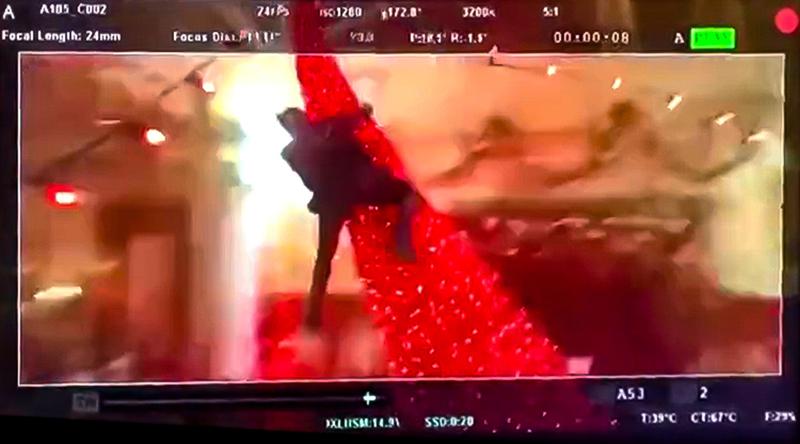 The video comes originally from Cartagena's Instagram, showing a larger process of the development of the stunt, from practice on a larger stage with dummy equipment and full protective gear all the way up to the more complete shoot in costume and on set.

This leaked footage from Batgirl gives fans their first real live look at the project, only around a month and a half after its cancellation. From what is shown in the video, it seems clear that the project aimed high, with this chunk of a set-piece showcasing seemingly complicated stunt, camera, and set-design work.

The full video also provides an interesting look at the development of a stunt like this, with Emely Cartagena's post showing its evolution from the blank-looking concept to the fully dressed execution.

Beyond the content of the footage, there is a larger question seemingly posed by its very existence. Is this all there is? Or is there more to be seen from the recently shelved Batgirl?

The answer is a complex one. On one hand, projects like this are often full of holes. Leaks have only increased on big-budget superhero projects like these, with the complications of the COVID-19 pandemic making security protocols aimed at curbing the flow of unofficial information that much harder to enforce.

However, Batgirl seems an especially complicated case. With Warner Bros. actively looking to downplay and bury the project, even going so far as to delete footage from company servers, a larger look at the film seems unlikely.

Additionally, leaks like those mentioned above often take place during production or post, windows of time that have very much closed. The opportunities afforded by multiple busy monitors and workstations are no longer there, keeping a flurry of videos from flowing out following this stunt breakdown.

Even so, more cast and crew may have taken videos like this, never planning on releasing details of the project before release, but now seeing it as their only chance to show off their hard work. Images from on-set monitors have leaked out before, even prior to the film's cancelation, so it's possible there's more out there.

The situation is an interesting one, and the response from Warner Bros. will almost certainly set the tone for what fans will be able to see from the canceled Batgirl in the future. But, if fans are lucky, there might be a few other clips like this tucked away somewhere, just waiting to slip out into the public eye.