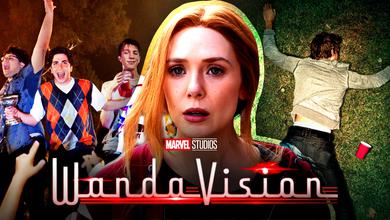 WandaVision has almost come to its completion, having just started its momentous third act. "Breaking the Fourth Wall" revealed that the villain tormenting Wanda and Westview was Agatha all along, a fact demonstrated in a nefarious song and dance number to remember.

The hit MCU series is, of course, packed with plenty of Easter eggs for eagle-eyed Marvel enthusiasts, including ones directed towards the villainous Mephisto.

WandaVision heavily references classic sitcoms of television past, made readily apparent by the many influences from The Office and Modern Family in "Episode 7." Agatha Harkness' mystical origins were even teased by a sly allusion to Bewitched, with her house being the very same one from the '60s sitcom.

It seems that the series has taken these callbacks to a whole other level, as evidenced by WandaVision's filming location...

WandaVision filmed on Blondie Street in Burbank, California, a Warner Bros. studio lot where many movies and television series have been shot. The street itself was used for many of Westview's exterior scenes, with several of the houses also appearing in other media.

First up is the Maximoff household, which can be seen clearly in the opening credits of "All-New Halloween Spooktacular!"

Wanda and Vision's home is the very same as the house seen in the holiday classic National Lampoon's Christmas Vacation, starring Chevy Chase and Beverly D'Angelo.

The house has some key differences from its appearances in 1989 and 2021, most notably the archway above the front door and the shape of the windows on the roof. Observant viewers will also notice that WandaVision's house has a distinct lack of snow.

Next is Agnes', or Agatha Harkness', home, which gets a clear view when Monica Rambeau attempts to infiltrate the facilities in "Breaking the Fourth Wall."

As mentioned previously, Agatha's home is shared with that of the 1960s sitcom Bewitched. Therefore, Agnes settling down here is a major foreshadowing for her witchy alter ego, Agatha Harkness.

The house has received a shiny coat of blue paint on the shutters and framework for WandaVision but lacks the covers seen on the large windows.

A wider view of Blondie Street shows how Westview is situated, appearing very sitcom-like. Director Matt Shakman mentioned that the set brought a "weird sense of fakeness" that other locations could not match.

After Monica and Wanda face off in the streets of Westview, another house is seen in the background with a person mowing the front lawn.

The Office and Modern Family were not the only late 2000s sitcoms that WandaVision made overt references to, as this home is almost identical to the one seen in The Middle.

This house seen in Westview differs slightly, having a more muted color palette and adding shutters to the windows.

The house across the road from Wanda's can be seen as Scarlet Witch uses her powers on Monica Rambeau.

Deviating from the family-friendly inspirations, the final house matches the one seen in Project X. This residence was also used in the films Small Soldiers and Pushing Daisies.

WandaVision has kept the general structure and color of the household relatively intact. Of all the homesteads, this house seems to resemble its original appearance the most, aside from the obvious burn marks.

Marvel Studios and the creative team behind WandaVision seemed to have put the authenticity of the show at the forefront. With a location as culturally rich as Blondie Street, the crew of the Disney+ series has taken full advantage when filming in the area.

This is especially true considering Blondie Street is located on Warner Bros. Ranch. While some non-WB productions such as American Beauty have filmed on the lot, it is peculiar that a Disney-owned project would choose to shoot at the location.

This shows how dedicated Marvel Studios has been in replicating the sitcom aesthetics of the past, willing to create deals with other production companies in order to capture the essence of classic television series. WandaVision is a celebration of the sitcom genre, but these other references show how intertextual of a project the show really is.

With two more episodes to go, it is likely that even more of Blondie Street will be shown off. If so, fans should expect plenty more Easter eggs to other films and series in the coming weeks.

The first seven episodes of WandaVision are streaming now on Disney+, jampacked with Easter eggs and references to classic television sitcoms.