WandaVision Episodes one and two were the first new Marvel Studios content fans have seen in 18 months. While there is a lot to talk about with the MCU officially being told in a week-by-week format, one thing it allows viewers to do is to spend six days breaking down every frame of new footage in search of Easter Eggs, nods to comic lore and hints as to what the props and set are trying to tell us about the story.

Marvel fans are notorious for putting on their best Sherlock hat every time a new frame of footage is released. And for the most part, they are pretty damn good at finding everything that matters lurking in the background of these shows (despite a D.B. Cooper-esque Easter Egg James Gunn claims is still out there.) WandaVision feels like the show that is catering to that mission more than MCU projects past.

The show is seemingly displaying a reality that has been manifested in the mind of Wanda, as there are bits and pieces of her story that are scattered throughout the details of this show. There are the obvious ones like the commercials from the first two episodes that referenced both Stark Industries and HYDRA's Baron Von Strucker , but there are also more subtle nods to Wanda's comic history like a Bova Ayrshire nod in the opening credits for Episode Two .

Both of these Easter Eggs could be from incredibly important or just simple fan service, but that does not stop fans from speculating and hunting for more little tidbits. It seems that viewers may have found another one that will get MCU fans even more excited than they already were.

In a blink-and-you'll-miss-it frame of WandaVision Episode 2, fans will notice that the wallpaper in Wanda and Vision's Westview home has a HYDRA base from Avengers: Age of Ultron printed on it.

This is not just any HYDRA base; this is the same base where we first met Wanda and her twin brother Pietro. It is also the same HYDRA base where Wanda was tested on by Loki's septor (a.k.a. the Mind Stone), unlocking her powers. 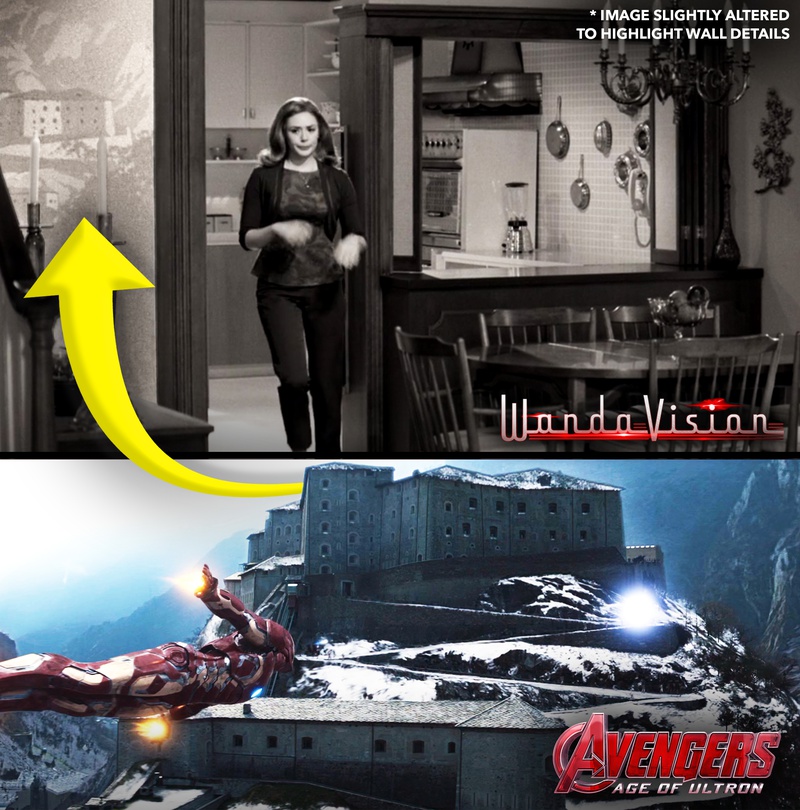 As we continue to grow in the Marvel Cinematic Universe, Avengers: Age of Ultron seems to be the gift that keeps on giving as fans seemingly find new details and Easter Eggs from that story. This could simply be a quick nod to Wanda's origin in the MCU that is put in for fans everywhere to live out a very famous Lionardo DiCaprio gif, but it could also be another sign of confirmation that Wanda herself has crafted every single detail of this world she finds herself in.

The biggest questions going into WandaVision is "who is behind this alternate reality, and who is pulling the strings?" While the latter question is still up in the air, we are seeing more and more clues that this is a world solely created from the memories and thoughts of The Scarlet Witch herself.

It seems clear that Wanda is pulling from some of the most traumatic moments of her life to connect the dots of her surroundings. We have already seen subtle nods to the Stark Industries bomb that killed her parents in Sokovia. And now we have seen not one, but TWO references to HYDRA, Strucker, and the experimentation that led to Wanda and Pietro's powers taking full form.

You can be assured that MCU fans everywhere will continue to break down every frame in search for clues to help us clear the muddied waters that is this story so far. Viewers should all be on the lookout for events, moments, and people that have been involved with bringing Wanda pain, and there is plenty to choose from as Wanda has arguably suffered the most loss in the MCU. C

an we expect these trials to continue to manifest within Westview moving forward? Absolutely. Will they lead to a breaking point Wanda cannot come back from? We have no idea. And that is what is so exciting.