WandaVision: An Early Episode Rumored to Adapt Iconic Scene from the Comics

While the world patiently waits for new content from the Marvel Cinematic Universe, there have been a few reveals in recent weeks that might've gotten fans excited. One MCU property in the form of WandaVision has been at the forefront of those reveals. Previously, it was revealed that Evan Peters had joined the cast of the Disney+ series, seemingly raising more questions than answers about the outlook of the show. On top of that, additional filming for the show is set to take place next month, which could hint that there are more scenes that need to be tweaked or added.

Set to arrive this December, WandaVision has become a staple for many theories and speculations on social media due to its unusual plot. It has been confirmed that the show will tackle a sitcom type of atmosphere but how Wanda and Vision end up in that reality remains to be seen. Now, a new detail about a key scene from one of the episodes of the show has surfaced.

In a feature article from Murphy's Multiverse, insider Charles Murphy casually dropped an intriguing detail about a key scene in one of the early episodes of WandaVision. While breaking down several comic panels that appeared in the background of a brief segment with supervising producer Mary Livanos during the Expanding the Universe Disney+ feature, Murphy mentioned that "one of the earliest episodes of WandaVision (I think episode 1) will see Wanda hosting a dinner party."

The dinner party from the comic panel that he was referring to was from Vision # 7 page 11 from 2015, which includes characters such as Wanda, Vision, Agatha Harkness, Wonder Man, Quicksilver, Bova Ayrshire, and the Whizzer. Murphy then clarified that he "certainly wouldn’t count on them having the same lineup of guests, but you can bet that Kathryn Hahn’s Agatha Harkness/Agnes will be there." 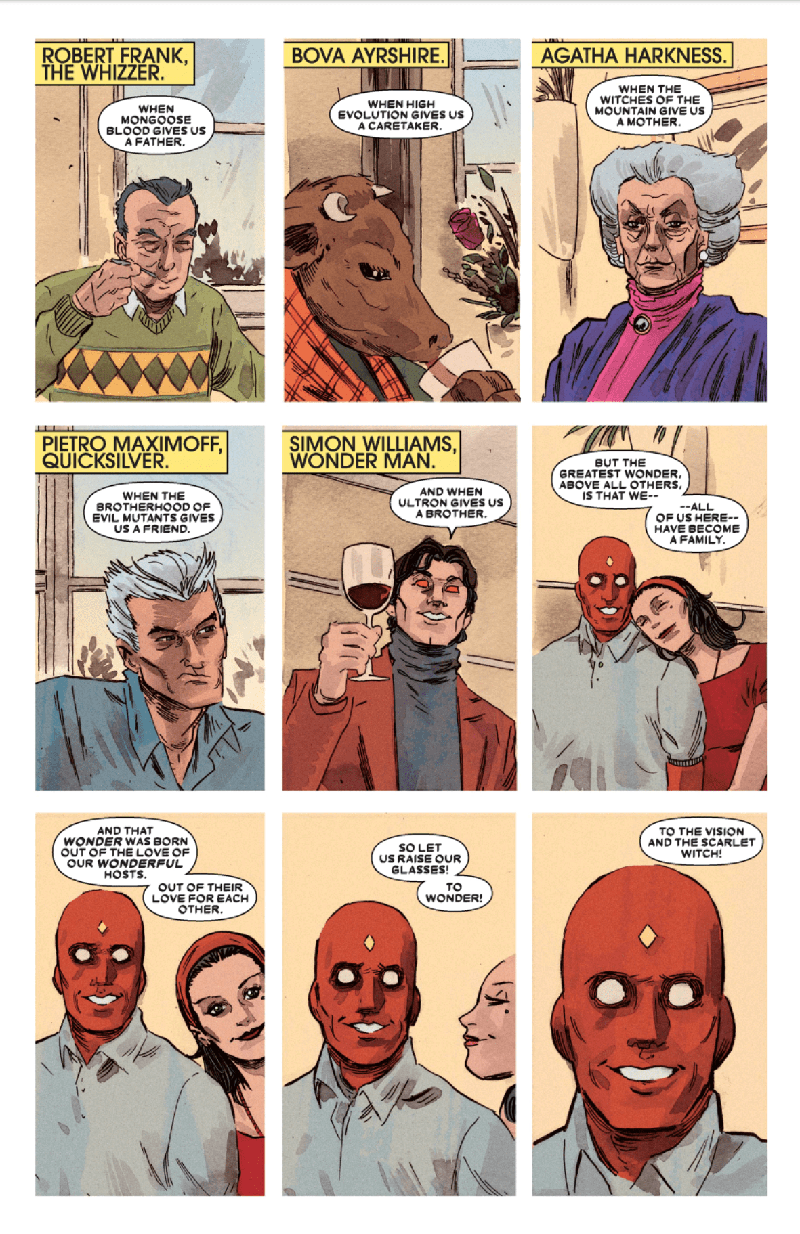 It seems that the reveals from WandaVision get weirder and weirder as fans inch closer to the show's intended release month. On the surface, the presence of a dinner party scene goes hand-in-hand with the sitcom concept of the show, which could hint that this is the show's way of introducing and establishing other characters to the audience. By being involved in a dinner party, it is likely that the conversations from the "neighbors" of Wanda and Vision could give a hint of what is really happening.

Another interesting thing to point out is the presence of Agatha Harkness in the show. In the comics, Harkness served as the magical mentor of Wanda, potentially hinting that the character could be aware of the reality-bending shenanigans that are happening in the show.

While Murphy mentioned that it is unlikely that the show will feature the same lineup of guests, the presence of Pietro Maximoff is worth mentioning. Given that MCU's Pietro already died in Avengers: Age of Ultron, it is not a far-off idea that Wanda could be imagining a world where her brother is alive, and a previously leaked audition tape could provide evidence on that. There is also a possibility that the other guests at the dinner party could also involve cameos from lesser-known MCU characters, or it could very well explain the inclusion of Kat Dennings' Darcy and Randall Park's Jimmy Woo. Whatever the case, WandaVision is proving to be an MCU show like no other.