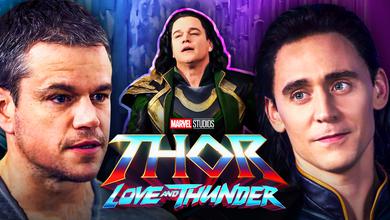 Although the Thor franchise was one of the MCU's earliest to come on the scene in Phase 1, the people of Asgard have remained a staple of Marvel's story through the course of Phase 4. 2022's summer blockbuster for Marvel Studios will be Chris Hemsworth's Thor: Love and Thunder, and Tom Hiddleston's Loki is approaching its highly-anticipated debut on Disney+ very shortly.

Thor: Ragnarok, the last time Hiddleston starred in an MCU solo movie, featured quite the entertaining scene for the God of Mischief's introduction with the Asgardian play entitled "The Tragedy of Loki of Asgard." Director Taika Waititi brought in quite the crew of Hollywood stars to recreate a new version Loki's death in Thor: The Dark World, which featured the talents of Luke Hemsworth, Sam Neill, and even cameo-master Matt Damon.

This will be somewhat recreated in Love and Thunder, which Hiddleston himself teased in his latest interview.

Loki star Tom Hiddleston spoke to Decider about some of what's coming in 2022's Thor: Love and Thunder, particularly with Matt Damon's next round of playing Stage Loki.

Hiddleston looked back to their time together on Thor: Ragnarok, revealing that he was "so amused" seeing Damon's take on his classic character. The Loki actor described it as "looking into a very slightly distorted mirror" in a way, teasing the fact that he "cant wait to see what they've been doing" on Thor: Love and Thunder:

“I was so I was so amused on that—I can’t remember, it was a couple of days on Ragnarok when he came in and did his thing. It was like looking into a very slightly distorted mirror. And his take on the whole thing was just hilarious, so I can’t wait to see what they’ve been doing.”

WHAT ARE THOR FANS IN FOR?

Tom Hiddleston and Matt Damon both helped make the theater scene in Thor: Ragnarok one of the film's highlights before all hell broke loose in Asgard. Fans may have been shocked to see this type of scene coming back in Taika Waititi's second film, but it doesn't appear to be garnering many complaints so far.

While Hiddleston's status in Thor: Love and Thunder is still uncertain, it's clear that he's all in on Damon returning as the Asgardian actor embodying the God of Mischief. The MCU regular spoke quite highly of how funny this moment turned out, and from what's been seen so far, the hilarity is only set to be amped up to new levels this time around.