In the wake of the coronavirus, it’s not only the film and television industries that have been disrupted, but also live entertainment and events. Each year, thousands of fans gather at conventions to celebrate their favorite pop culture franchises and eagerly anticipate the news that the studios bring about their latest projects.

Now that both San Diego Comic-Con and Star Wars Celebration 2020 in Anaheim have been officially canceled, the team at The Direct has put together our favorite Star Wars convention moments so that we can all relive them vicariously until conventions return.

In 2009, Disney launched its own biennial convention, drawing in fans with the might of their franchise catalog. When Disney acquired Lucasfilm in 2012, the company quickly started on plans to expand the franchise across many forms including films, television series, books and video games. But one of the biggest surprises announced at D23 was that of a Star Wars-themed land being built in Disneyland Anaheim and Disney’s Hollywood Studios Florida.

Galaxy’s Edge would be the first opportunity for fans to live out their Star Wars dreams in person. The park promised an immersive experience allowing visitors to fly the Millennium Falcon, drink at the Cantina, and meet their favorite characters. Five years later with both parks now complete, it has definitely delivered.

Celebration III held in Indianapolis saw the convention promoting the upcoming release of Episode III: Revenge of the Sith. But this event was made even more memorable by three Q&A sessions with Star Wars creator George Lucas, marking his first time attending Star Wars Celebration. Many fans waited overnight to see Lucas, and he answered questions about the final prequel film and also announced that The Clone Wars would be turned into a fully-fledged 3D animation series for TV. 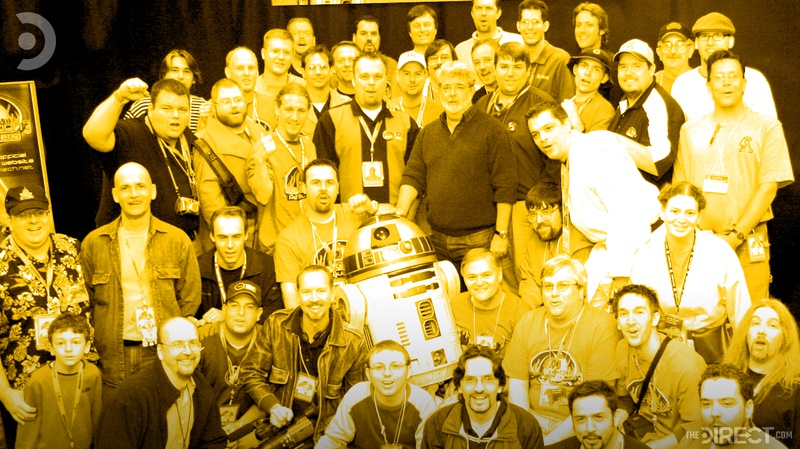 At a 10th anniversary panel for The Clone Wars series, executive producer Dave Filoni announced that after a six-year break, the series would be returning for a seventh and final season. The panel also revealed a new trailer promising an exciting ending for the much-loved show while teasing the long-awaited reunion between Anakin Skywalker and his padawan, Ahsoka Tano.

Celebration I in Denver was the biggest gathering of Star Wars fans since the original movies were released in cinemas. With a return to the franchise imminent in The Phantom Menace, crowds gathered in the rain and snow to get first glimpses at the new movie and the premiere of the Duel of the Fates music video. Lucasfilm even brought out life-size replicas of an X-Wing and Anakin’s pod racer from their prop archives. 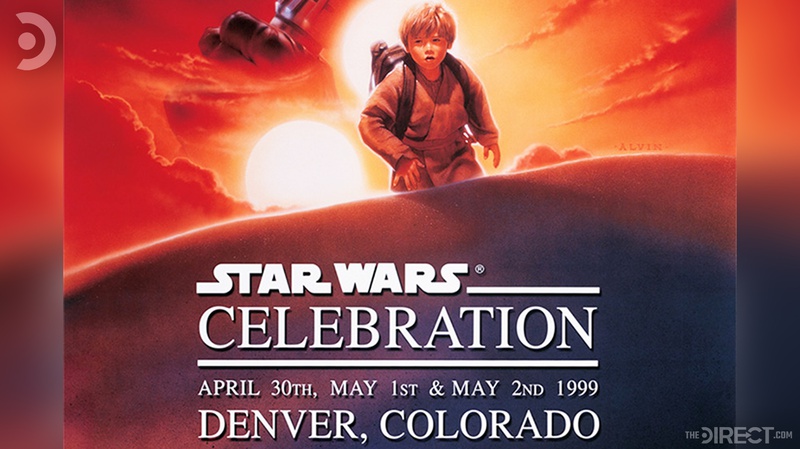 In 1976, Comic-Con was in its sixth year and no one had even heard of the galaxy far, far away. In a half-full room, Roy Thomas and Howard Chaykin, the artists of the Star Wars comic that was preceding the film, presented a slideshow with production stills and art from A New Hope.

Roy Thomas and Howard Chakin tell a less than packed audience about a film called Star Wars at @Comic_Con in 1976. #ThrowbackThursday #SDCC pic.twitter.com/XIrJgaAfrL

At the time, no one knew what Star Wars would become, but even then Lucasfilm could see that its audience was with the fans. The company continued to return to Comic Con to promote the trilogy with Empire Strikes Back and Return of the Jedi, with its army of fans growing stronger each year.

In 2019, everyone was anticipating the end of the Skywalker Saga. Disney debuted an Episode IX trailer with a big focus on the legacy coming to an end.

The end of the Skywalker Saga does not mark the end of Star Wars itself, and Disney proved this when they revealed big plans for the franchise on Disney+. The previously announced Rogue One prequel series brought stars Diego Luna and Alan Tudyk to the stage and the final season of The Clone Wars announced its premiere on Disney+ in February 2020.

The eagerly-anticipated The Mandalorian series was on everyone's minds as executive producers Jon Favreau and Dave Filoni and cast members Pedro Pascal, Gina Carano, Carl Weathers, Giancarlo Esposito and Taika Waititi appeared to debut the first trailer. But the biggest announcement was the confirmation that, finally, the Obi-Wan Kenobi series fans had been clamoring for was actually in production and Ewan McGregor would be returning.

Star Wars and Comic-Con have long been friends, whether it’s a booth on the convention floor or a cosplay gathering of Stormtroopers. But 2015 was the first time in years that Lucasfilm would be bringing a Star Wars movie to Hall H, and the panel did not disappoint.

The session was light on details about the film but brought Kathleen Kennedy and J.J. Abrams along with new The Force Awakens cast members Daisy Ridley, John Boyega, Oscar Isaac, Adam Driver, Domhall Gleeson and Gwendoline Christie. But the surprises really began when the Star Wars holy trinity were reunited. Carrie Fisher, Mark Hamill and Harrison Ford (in a rare convention appearance) were finally together again on stage, and Fisher and Ford shared a smooch to recreate the on-screen kisses of Leia and Han Solo.

Then, in an unprecedented move, Abrams invited all 6500 attendees to a live Star Wars concert composed by John Williams outside the convention center, complete with fireworks and lightsabers for everyone. For a Star Wars fan, it doesn’t get much better.

The panel concluded with a tribute to the late Carrie Fisher, with her daughter Billie Lourd reenacting the iconic "help me Obi-Wan Kenobi" speech and John Williams surprising the crowd with a live orchestra performance of Princess Leia’s Theme.

After years with few Star Wars projects to be excited about, 2015 hailed a return to the franchise and Star Wars Celebration Anaheim was the first chance for fans to get news about all the upcoming developments. The major one was, of course, a first look at Episode VII: The Force Awakens. The panel debuted a new trailer and the iconic “Chewie, we’re home” reveal of Harrison Ford’s return as Han Solo.

But the exclusives didn’t stop there with first trailers for the upcoming Star Wars Battlefront II video game and hit animated series Rebels season 2. And on the final day, director Gareth Edwards appeared to promote the first Star Wars anthology film Rogue One, with a truly epic first trailer that teased the return of Darth Vader and the Death Star to cinema screens once again.

Is There Hope For Conventions Again? 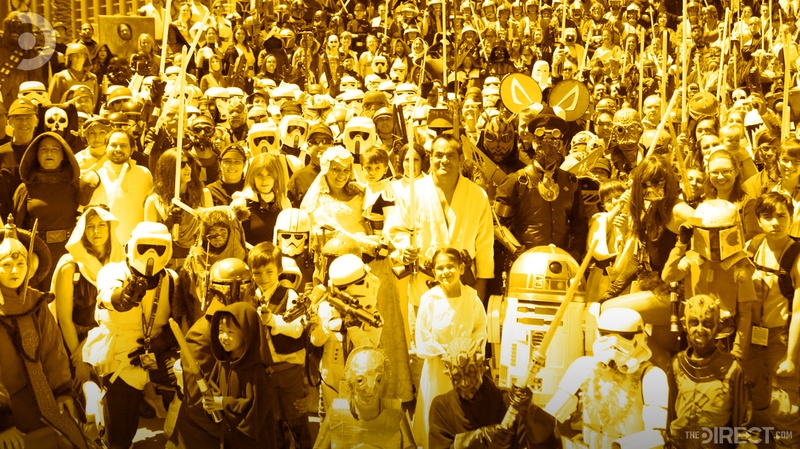 While it’s a necessary precaution to cancel or postpone conventions during this time, it’s still unfortunate for fans as there’s plenty of Star Wars news to be excited about. The Mandalorian Season 2 is debuting later this year, Obi-Wan and Cassian Andor series are in development, and there’s a whole slate of new Star Wars films also in the works.

One would have hoped that new information was going to be revealed about one or all of these projects in the conventions this year. However, now Disney and Lucasfilm will need to look for new ways to promote their content. Virtual conventions and panels are all the rage at the moment with most creatives stuck at home, and there has already been the online Star Wars convention for May the 4th. San Diego Comic-Con has announced an at-home event for this year, and it's possible Disney+ could become a platform to premiere new footage.

Or of course Lucasfilm can just wait it out. With many of these productions delayed anyway, there are plenty of conventions to choose from next year with SDCC and D23 set to return in 2021 and Star Wars Celebration making its comeback in 2022.