Star Wars: The High Republic is Lucasfilm's latest multimedia project , that will explore events taking place 200 years prior to the events of Star Wars: Episode I: The Phantom Menace . After the much beloved Old Republic was made non-canon and relegated to the Star Wars: Legends category of stories, fans  Originally beginning development under the name ‘Project Luminous’ , Star Wars: The High Republic is a new publishing initiative that chronicles stories of the Jedi Knights at the height of their power. The project will also not be tied to any film or television property.

A new set of dates have been officially announced for a multitude of projects under The High Republic banner.

This news was accompanied by a formal statement from Creative Director of Lucasfilm Publishing, Michael Siglain: 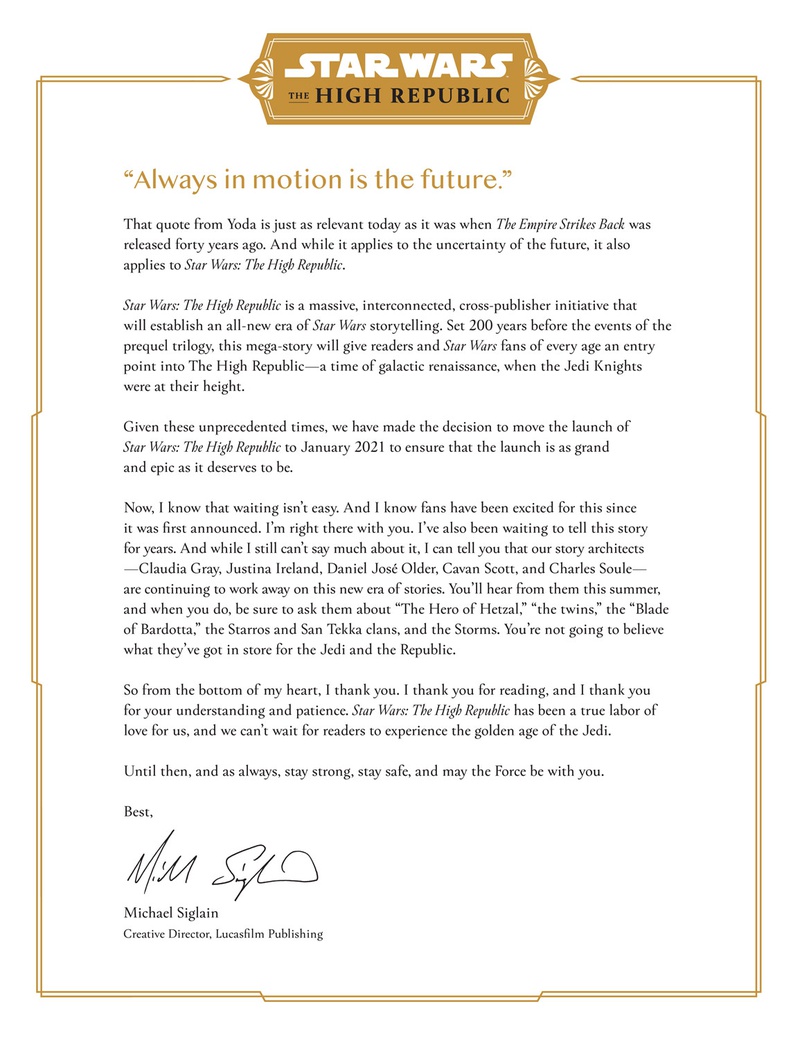 As Star Wars: The High Republic is a massive undertaking for Lucasfilm Publishing, it is understandable why compromises had to be made for its launch. Logistically, the project is likely to be incredibly difficult to coordinate under current circumstances.

The wide array of media types that The High Republic encompasses, from novels to comic books series, makes the development of this project more unique than other Lucasfilm print ventures. Secondly, Lucasfilm has stated that creatives have been given a lot of freedom with the stories that they can tell. However, it is likely that there needs to be some sort of approval process to ensure Lucasfilm is happy with the projects and that there is no contradiction between these stories. In both cases, a sense of consistency has to be established, which is difficult to achieve across so many different sub-projects whilst not under the same roof.

Neither comic book series from Marvel or IDW Publishing previously received release dates, so official word will most likely be held off on until Lucasfilm Publishing is confident on a firm release date.

Siglain's accompanying statement lists a variety of terms and phrases related to the projects, including "The Hero of Hetzal", "the twins", "the Blade of Bardotta", "the Starros and San Tekka clans" and "the Storms." Some of these terms have appeared in Star Wars canon previously, with Bardotta being a planet that appeared in Star Wars: The Clone Wars. "Starros" could refer to the character Sana Starros, who has recently been associated with Han Solo in the novel Last Shot , and "San Tekka" likely refers to Lor San Tekka, who was briefly seen in Star Wars: The Force Awakens .

Hopefully we will be able to learn more about what Star Wars: The High Republic entails before it finally launches in 2021.