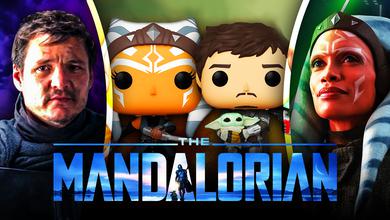 Six months after concluding its second season in December, The Mandalorian remains one of the most discussed series in pop culture. The blockbuster Disney+ show stars Mandalorian Din Djarin and Force-wielding child Grogu on their travels throughout the galaxy. Many hardcore Star Wars fans have already fallen in love with the series after it has marked the live-action debut of several fan-favorite characters from The Clone Wars and Rebels animated projects.

As is the case across pop culture, merchandising is a critical part of the popularity of the Star Wars universe, with the franchise leading to the release of many high-selling products every year. One of the most popular product lines to incorporate the iconic sci-fi world is the legendary Funko Pop!, which has just revealed a new line of Mandalorian-centric collectibles.

Star Wars has officially unveiled seven new Funko Pop figures inspired by the second season of The Mandalorian. All seven collectibles are currently priced at $8.99 each on the online outlet, with release scheduled to take place across September and October. All of the new figures can be pre-ordered online here.

Images of each new Funko Pop! can be viewed below:

Alongside his inclusion in Din Djarin's figure, Grogu received two Funkos of his own with one making reference to the fourth episode of the season, "The Siege," in which the force-user was shown eating from a bucket of blue cookies. This Grogu Pop! figure is now available for pre-order here.

In another figure based on a hilarious Grogu-centric moment from the season, a Target-exclusive figure shows The Child being attacked by the soup creature from the third episode, "The Heiress."

Almost forty years after his supposed on-screen death, The Mandalorian season two saw the return of Boba Fett, played by Temuera Morrison. The legendary bounty hunter's Funko Pop! showcases his Beskar armor, damaged from his encounter with the Sarlacc Pit in Return of the Jedi. This Boba Fett Pop! figure is now available for pre-order here.

Rosario Dawson made her Star Wars debut as Ahsoka Tano in the second season of The Mandalorian. The character is set to return in her own spin-off series on Disney+ which will take her on the hunt for Ezra Bridger and Grand Admiral Thrawn. Her Funko figure showcases the Clone Wars Jedi ready for a fight, wielding her two white-bladed lightsabers. This Ahsoka Pop! figure is now available for pre-order here.

As shared by @dis_pops on Twitter, the Mexican Amazon site has listed an exclusive variant of Rosario Dawson's Ahsoka figure which shows her lightsabers in a more defensive position, and her hood up.

Much like Ahsoka, Bo-Katan made her live-action debut during the Disney+ series as well, sending Mando and Grogu on the path to Ahsoka while on her own quest to acquire the Darksaber and take the throne of Mandalore. This Bo-Katan Pop! figure is now available for pre-order here.

The Mandalorian is shown in her legendary armor without the iconic helmet within her new figure, wielding blasters in both hands. Additionally, Bo-Katan will be accompanied by a rare Chase version of the figure in which she will don her iconic Beskar helmet.

Moff Gideon's multi-season plan finally came to its climactic end in The Mandalorian season two's finale as he revealed his Dark Troopers, only to quickly see an entire battalion single-handedly taken down by Luke Skywalker. The Dark Trooper's Funko Pop! shows the battle droid ready for action and armed with a large blaster. This Dark Trooper Pop! figure is now available for pre-order here.

THE MANDALORIAN CONTINUES TO RULE THE STAR WARS WORLD

With many months already gone since the likes of Pedro Pascal's Din Djarin and Rosario Dawson's Ahsoka last appeared on screens, the Disney+ series continues to be the most discussed property in the Star Wars universe. While hardcore animated fans are enjoying the weekly releases from The Bad Batch, others are eagerly awaiting this year's return to the post-original trilogy timeline of The Mandalorian.

The third season of the record-breaking show isn't expected to hit Disney+ until 2022; however, the story will continue in The Book of Boba Fett, a spin-off series that will hit the streaming service this December. As the release of the second live-action Star Wars series approaches, fans can likely expect the first official look at the bounty hunter-centric project to arrive in the near future.

The Mandalorian will return to Disney+ in 2022 with its third season.

Six of the newly-revealed The Mandalorian Season 2 Funko Pop! figures can be pre-ordered in a case here.