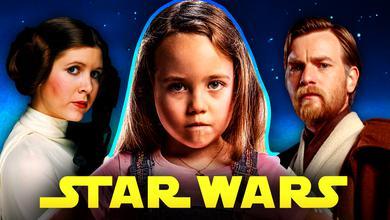 The forthcoming Obi-Wan Kenobi series is by far one of the most anticipated Star Wars projects since the Disney acquisition of Lucasfilm.

Announced at last in 2019, the show will see the return of Ewan McGregor to the role he last played in 2005's Revenge of the Sith. The limited series is set 10 years after the rise of the Empire and bring Kenobi face to face with his former pupil, Darth Vader - an encounter that has been described as "the rematch of the century".

Cameras officially began rolling in the Spring under the supervision of director Deborah Chow, who helmed two popular episodes from The Mandalorian's first season. The star-studded cast is performing both on practical sets and in front of The Volume studio crafted in Los Angeles, and if things continue to proceed as planned the series will drop in 2022.

Details have been scarce regarding the plot of the forthcoming series, but a new rumor suggests the Jedi Master's journey will be driven by the involvement of some very familiar royalty...

Cinelinx has reported that Princess Leia will appear in Obi-Wan Kenobi, serving as the catalyst for the titular character's adventure. This younger Leia will be played by Vivien Lyra Blair, known for her previous work in Bird Box and We Can Be Heroes.

Leia is said to be the "impetus" of the series and will have a major part in the events that transpire, though specifics remain unknown.

THE PRINCESS AND THE JEDI

It comes as little surprise that Leia will be involved in Obi-Wan Kenobi.

As was mentioned by Cinelinx, rumors of the young princess' involvement in the series have spanned back quite some time, and word of Blair's casting further corroborates this news.

Telling a compelling story about Obi-Wan during his time between Episodes III and IV was always going to be difficult, as there's little that can be done in terms of action for an exiled Jedi intent on watching over someone. There's really only one thing that can motivate Obi-Wan to leave his dusty hut and take action: a threat to the children of Anakin Skywalker.

The vast, vast majority of his time in solitude is spent looking after Luke, and beyond Maul's realization of his purpose in Rebels, little more has come from Obi-Wan's days as a hermit. Kenobi has a much closer connection to Luke for obvious reasons, but Leia is just as important to the future of the galaxy, and a dire threat to the princess is something big enough to prompt action from the Jedi Master.

What exactly Leia does to get herself into trouble and catch the eye of the Empire is going to be an interesting subject. At the point in the timeline where Kenobi takes place, the twins are only 10 years old and Leia is far off from her early days in the Rebellion. Perhaps it's not so much her actions but an encounter with an Imperial that draws some suspicions about the kid's heritage.

A disturbance in the Force of this magnitude should get the crazy old wizard to briefly abandon his post and take on any threats posed to both Leia and, by an outside chance, Luke. There will be battles with Inquisitors, possible run-ins with former allies, and the greatest threat to the twins of all: Darth Vader. The Sith Lord must be prevented from learning about his children at all costs, and Obi-Wan is more than up to the challenge of fulfilling his duty.

Perhaps Obi-Wan and Leia will meet, alongside even Bail Organa. The former senator trusted his adopted daughter enough to send her in search of Kenobi's aid during the events of Rogue One, and beyond a few lines and her iconic message in A New Hope it seemed as if Leia knew more of the Jedi Master than mere instructions for a fetch quest.

How everything plays out will be very interesting, to say the least. Of all the Star Wars projects to come under Disney, Obi-Wan Kenobi may be the one most closely tied to George Lucas' saga based on the connections to Vader and his kids alone - even more so than the sequel trilogy. With each new detail to come, the outlook for the series becomes more and more promising.

Soon enough, Obi-Wan will grace screens once more, and the Force will be with him.