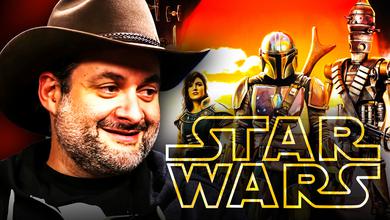 An entire generation of Star Wars fans have known no life without Dave Filoni's fingerprints on their favorite projects.

Apprenticed to George Lucas shortly after the release of Revenge of the Sith in 2005, Filoni was instrumental in bringing Star Wars: The Clone Wars to TV screens for years as he served as Supervising Director. In large part responsible for the creation of icons Ahsoka Tano and Captain Rex, as well as bringing some of the strongest Star Wars stories to life, Filoni became a hero to the fandom.

Filoni's role within Lucasfilm expanded after the company was purchased by Disney when he was appointed as the creative lead for all Lucasfilm Animation projects mid-way through Star Wars Rebels. After that series culminated, Filoni brought The Clone Wars back from its devastating cancellation for one final season and is currently overseeing the series' successor, The Bad Batch.

The opportunity arose for the student of Lucas to jump into the live-action realm when he was approached by Jon Favreau to team up for The Mandalorian. That series has been an enormous success for Disney+, thanks to the Mandalorian himself and Grogu, and has spawned several tie-in shows as a result, all of which Filoni will have a heavy hand in guiding. Given his busier schedule and work in several mediums, it seems appropriate that Filoni has been given a hefty promotion by Lucasfilm...

As the above suggests, Dave Filoni has been promoted to serve as an Executive Creative Director at Lucasfilm. While the move was made in late Spring of last year, as is indicated by a Legacy Effects Facebook post, it wasn't until recently that the promotion made waves due to a recent update to Filoni's page on the official Lucasfilm website.

A MUCH LARGER WORLD

Filoni's promotion undoubtedly comes as a result of the creator's heavy involvement in the future of the live-action TV space for Star Wars.

It was officially revealed that The Book of Boba Fett was in the midst of early shooting last Winter following the culmination of The Mandalorian's second season, and should be headed towards post-production as its December release approaches. When Boba Fett wraps, Filoni and Jon Favreau will immediately begin production on The Mandalorian Season 3, which may or may not be happening already.

Additionally, it was announced during Disney's Investor's Day event that the duo would be executive producing other tie-ins to the hit series, Rangers of the New Republic and Ahsoka - the latter of which will be written by Filoni himself.

Word on the street is that Ahsoka will be serving as the sequel to the animated series Rebels, which would see the titular character team up with Sabine Wren to find the missing Ezra Bridger and former Imperial officer, Grand Admiral Thrawn. The show was directly set up in "Chapter 13 - The Jedi" of The Mandalorian, also written and directed by Filoni, and will serve as one of the next steps in much larger narrative.

Doug Chiang and John Knoll have been with Lucasfilm since the 1990s, both having worked on the prequel trilogy under Lucas and continually bringing new ideas and designs to life. Knoll is responsible for the existence of Rogue One: A Star Wars Story, having written a story treatment and pitched the idea to Kathleen Kennedy in the early days of the Disney Star Wars era.

Both Chiang and Knoll are heavily involved in the development of The Mandalorian, the former overseeing the design process while the latter supervises ILM and works to bring The Volume to life. Given their expanded roles with Lucasfilm, it's safe to say that both will have major roles in the productions of the forthcoming projects in the Mando timeline, a result of their long, successful history with Star Wars and being seen as key collaborators for Favreau and Filoni.

Filoni, Chiang, and Knoll are certainly very busy men, with many projects on their plates in the near future and likely many more beyond that remain unannounced. The going rumor is that The Mandalorian's overall storyline won't conclude until 2027, and if that proves to be the case then the new Executive Creative Directors will have a lot to oversee as the next half-decade unravels.

Each of these creators have routinely produced exceptional work in the galaxy far, far away, and Star Wars fans have the faith in them to continue so going forward.

Rangers of the New Republic