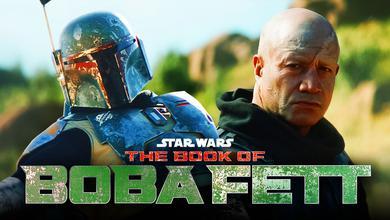 The Skywalker Saga might have already finished its theatrical run, but the story is far from over on the small screen. The expansion of the franchise was mainly due to the impressive run of The Mandalorian, and it ultimately led to a barrage of new projects such as The Book of Boba Fett.

The upcoming series will see the return of Temeura Morrison as the titular bounty hunter alongside Ming-Na Wen's Fennec Shand, a character that was introduced in The Mandalorian. Plot details of The Book of Boba Fett are still being kept under wraps, but it is expected that it will continue the plot point revolving around Tatooine that was shown at the tail-end of the second season of the Pedro Pascal-led Star Wars project.

Anticipation is high for The Book of Boba Fett, especially after it was revealed that the same creative team from The Mandalorian will be involved, led by Dave Filoni and Jon Favreau.

Production is currently ongoing for the series, but a new rumor may indicate that it will soon wrap.

FILMING UPDATE FOR THE BOOK OF BOBA FETT

Bespin Bulletin shared a production update for The Book of Boba Fett.

The outlet unveiled that outdoor production for the Temeura Morrison-led project appears to have wrapped filming because “the sets have since been taken down” at the train yard location in Los Angeles where The Mandalorian filmed its first two seasons and where Season 3 will commence shooting scenes.

Bespin's sources reportedly revealed that the different departments and companies involved in the show's production “have really ramped up to meet deadlines, many of which are for this [April].”

Despite that, Bespin Bulletin did note that the series might still be shooting scenes at The Volume, but “either way production on Fett is either wrapping soon or already wrapped.”

While fans should take this rumor with a grain of salt, it makes sense for The Book of Boba Fett to wrap soon so that the show can meet its December release date later this year. In addition, this production update for the much-anticipated series should give fans insight into the filming timeline for The Mandalorian Season 3.

Bespin's reveal that everyone who is involved with production has “ramped up to meet deadlines” could hint that Lucasfilm really wants to meet the original December release timeline. This is important since The Bad Batch and The Book of Boba Fett are the only two major Star Wars releases this year, with The Mandalorian potentially arriving in early 2022.

Given that Season 3 doesn't have a release timeline yet, this filming update for Boba Fett could be an indication that cameras will start rolling for The Mandalorian again sooner rather than later.

Aside from lead stars Temeura Morrison and Ming-Na Wen, Boba Fett is also rumored to feature several mainstays from The Mandalorian such as Pedro Pascal's Din Djarin and Bill Burr's Migs Mayfeld.

It remains to be seen how these characters will be integrated into the bounty hunter's adventure, but it's reasonable to assume that it will give viewers an idea of what to expect for Season 3 while also propelling the narrative of Boba Fett into greater heights.

With production wrapping up soon (hopefully), it's only a matter of time before an official trailer releases, dialing up the hype for the series.

The Book of Boba Fett is set to debut on Disney+ December 2021.