Always two there are. No more, no less. A master, and an apprentice.

But which was destroyed? The master, or the apprentice?

We're about to find out, because its time for the championship round of the Star Wars Madness Tournament ! After a Final 4 round worthy of recognition in the Jedi Archives, the stage has been set for one final showdown. Below is our updated bracket: 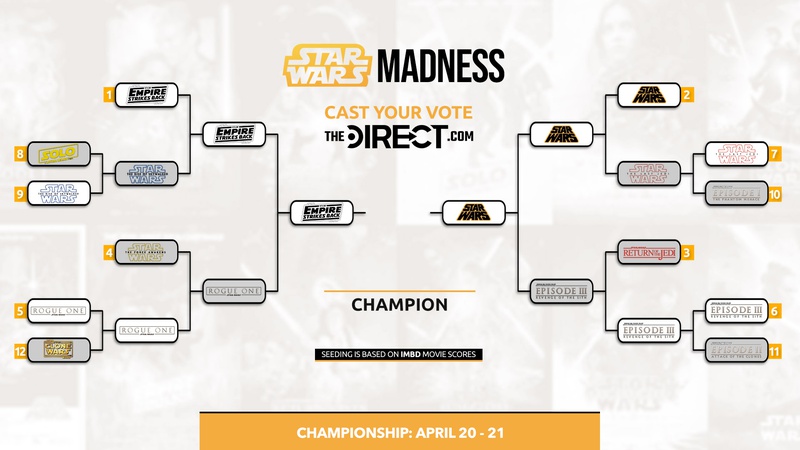 It's fitting that the top two seeds are all that remain, prepared to lay it all on the line for one last chance at the Star Wars crown. Star Wars: A New Hope started it all, introducing us to George Lucas' galaxy far, far away and setting up everything we know about this world of storytelling. But the circle is now complete - The Empire Strikes Back began as A New Hope's sequel, but now it's the top seed. This showdown will decide once and for all which film reigns supreme in the Star Wars saga, a fateful final battle between teacher and student. Empire has lived up to its name, marching its way to the championship round as easily as Imperial forces reached Echo Base. A New Hope was having a strong run until the Final 4, where it just edged out a victory over Revenge of the Sith by the slimmest of margins - 1%. But now is not the time for the original picture to be looking back. Both films have everything to gain, and everything to lose. There is no runner-up, only victory. And it's time for our readers to decide which movie will win it all. VOTE BELOW!

In The Empire Strikes Back, we immediately find our heroes in danger, setting the field for the rest of the film. Luke heads to Dagobah to begin training as a Jedi with Yoda, facing his inner darkness and learning the lesson of belief. Han and Leia are hosed from the get-go, and as they all fall into the trap set by Darth Vader on Cloud City, the dark lord solidifies himself as one of the most cunning villains in cinematic history.

Come on. There's no way this wasn't going to get mentioned. This is one of the most iconic lines in the history of motion pictures, words that changed the landscape of the Star Wars saga forever. What's most interesting about this twist is that Luke already knew who his father was and what became of him - or so he thought. After Vader has toyed with him on three different set pieces, trying to freeze him in carbonite, throwing him out a window, and slicing his hand off, he gave Luke the courtesy of officially making it the worst day of his life by telling him he was his son. Luke's world was turned upside down, the future became even more uncertain, and this moment defined Star Wars as a story about family. Vader was hellbent on finding Luke from the opening crawl of the film, and the buildup to this moment throughout the entire film makes the revelation hit the audience just as hard as it hits Luke. If someone successfully created a time machine, millions of young Star Wars fans would use it to go back to see the reaction to this moment in 1980.

For all intents and purposes, Empire has had the biggest effect on Star Wars and will likely go unmatched. Empire took the series in a darker direction following a happy fairy tale ending in A New Hope , proving that Star Wars was serious about challenging its characters and was here to stay. Lucas carried forward with Luke's 'hero's journey' through his training with Yoda and defeat on Cloud City, which resulted in catastrophic ramifications for all of the heroes. Yoda's introduction into the series pushed Star Wars into new boundaries of mysticism, leaving behind powerful messages for all audiences. The romance between Han and Leia proved that Star Wars could succeed with any kind of storytelling, so long as the characters were done justice. A sequel in which the bad guys won was unheard of for its time, made even more stunning by the fact that even the villain suffered some form of emotional defeat. The Empire Strikes Back transformed what Star Wars is and can be, and has set the bar astronomically high for every creator entering the galaxy far, far away.

Why The Empire Strikes Back should beat Star Wars: A New Hope ?

While A New Hope is a hopeful, upbeat introudction to our heroes, Empire is when they really start to grow and things get dire. The Empire Strikes Back is essentially a perfect film, with its only real flaws being drawbacks from aged visual effects and an occasionally recognizable puppet. Empire tells a deeply personal story for all of its characters with sky-high stakes that culminates in a shocking reveal leaving our heroes with nothing but hope and each other. The score is incredible, not only in the big sequences, but also during the expositional moments as well; there's not a single point in the film that can't be identified by John Williams' accompanying score. The writing and dialogue fit the characters perfectly, and the tone set for the film emphasizes the gravity of the situation the Rebels are found in. Also: Vader. The movie was about Luke's journey towards becoming a Jedi and Han and Leia's budding romance, but in many ways Darth Vader steals the show and has become the face of this film and franchise. It's no mystery why Empire is frequently placed near the top of fans' Star Wars movie rankings - we'd be worried if it weren't.

Star Wars: A New Hope throws us into the action immediately as the Empire flags down Princess Leia aboard the Tantive IV to recover the stolen plans to the Death Star. With the princess captured, the bickering droids C-3PO and R2-D2 flee to Tatooine, launching an epic journey for Luke Skywalker, who yearns for adventure. He joins Obi-Wan Kenobi to learn the ways of the Force, and is helped by Han Solo in rescuing Leia and later destroying the Death Star. A story about hope and friendship, this modern fairy tale kicked off the entire series as we took our first step into a larger world.

Use the Force, Luke.

There a thousand notable moments in the film, but this one in particular holds a lot of significance. The moment was built up from the moment we met Luke Skywalker at his homestead on Tatooine, watching a twin sunset as he looks out at what lies beyond his limited scope of the world around him. Having been exposed to the Force by Obi-Wan Kenobi before an episode takes place for the young hero aboard the Death Star, Luke is prepared to help the Rebel Alliance destroy the battle station despite the loss of his mentor. The attack was a disaster for many pilots, as the vast majority were taken out before they could reach the trench. All hope seemed lost. Luke's old friend Biggs was just shot down, one attempt at hitting the exhaust port has already missed, and Luke has his (unknowing) father Vader on his tail. A cue of the Force theme picks up as Obi-Wan's voice tells Luke to use the Force. Luke has a newfound sense of peace and clarity, prepared to trust his feelings and turn off his targeting computer as he takes down the Death Star, with a little help from Han at the last minute. The only way to describe this moment is magical, the culmination of everything this film is about.

A New Hope is Star Wars. This film kicked off everything, establishing George Lucas' space fantasy as an expansive universe with an infinte amount of stories to tell. Everything we know about Star Wars came from this film. Everything we've seen has been built on the shoulders of A New Hope . The movie gave us a modern fairy tale with a cast of heroes who use their belief in each other as fuel to defeat the evil Empire. We were given our first look at the mysticism of the universe through the teachings of Obi-Wan Kenobi, who explained how the Force binds the universe together. In a stroke of genius, the film is set in the very middle of the galactic action, as a victory is alluded to in the opening crawl and Kenobi details the Clone Wars and the fall of the Jedi Order. A history is established that gave an opportunity to go back and tell preceding stories, while the film sets up a strong cast of heroes who are ready to push the story forward as well.

Why A New Hope should beat The Empire Strikes Back ?

You can never go wrong with the one that started it all. More than anything, A New Hope is just fun. The heroic trio's escapades aboard the Death Star never ceases to entertain, creating unique dynamics among the three that show how much chemistry the cast had from the earliest days. Unlike Empire , this film has a happily ever after ending that leaves young fans inspired to create their own adventures. The opening sequence is brilliant, letting us know instantly who's important, what the sides are, and setting the stakes high instantaneously. For all intents and purposes, everything great about the Star Wars universe is thanks to A New Hope . Without this epic space fairy tale, none of us would be here.

VOTE IN THE TWITTER-EXCLUSIVE POLL NOW

The #StarWars Madness tournament - a bracket-based gauntlet for fans to decide the best movie of the #StarWars franchise - has been narrowed down to the final two films! Vote in the Championship match below and see the progress of the tournament here: https://t.co/Ulo5yzjwpx