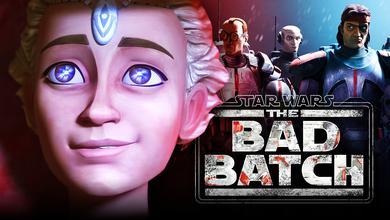 Warning - This article contains spoilers for the premiere of Star Wars: The Bad Batch.

For 2021's May the 4th or Star Wars Day, fans received a brand new Disney+ series The Bad Batch, news about Disney's new lightsaber tech and luxury Star Wars hotel, and an on-set photo from The Mandalorian's Pedro Pascal.

But honestly, is it even May the 4th without new Star Wars merchandise?

To properly commemorate the internationally recognized Star Wars Day, Hasbro revealed a number of new Star Wars figures including one character in particular that fans have yet to see in Star Wars: The Bad Batch.

According to Hasbro, this character is known as Vice Admiral Rampart, and it appears he will serve as a villain in future episodes of The Bad Batch Disney+ series.

But since audiences have yet to see the character in the series, it's surprising that he's even being promoted. This, of course, begs the question of whether his reveal was actually an unintended spoiler?

What fans do know is that this Vice Admiral Rampart Black Series figure comes with two accessories, one of which is a mouse droid, and he will be available for purchase in-stores or online beginning in the fall of 2021.

However, preorder is available beginning May 5 exclusively at Walmart.

A NEW VILLAIN FOR THE BAD BATCH CAST

As a sequel to the popular Star Wars: The Clone Wars series which concluded on May the 4th of 2020, there's been very little revealed about The Bad Batch apart from its primary cast of characters and new addition Omega.

This is why the reveal of Vice Admiral Rampart came as a surprise, especially since he's yet to appear on screen.

However, his reveal does confirm that fans can expect a slew of villains in The Bad Batch as both Grand Moff Tarkin and Emperor Palpatine has already made an appearance.

It's possible that since both Tarkin and the Emperor will be busy building the new Galactic Empire, Rampart may be tasked with contending with Clone Force 99 and possibly pursuing any surviving Jedi?

The second episode of The Bad Batch will debut on Friday, May 7, 2021.