Simon Pegg Wants to Join The Mandalorian Cast as Dengar 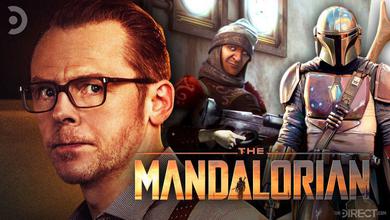 When The Mandalorian released on Disney+ back in November of 2019, it became a phenomenon and managed to unite the fandom in their shared love for Mando and The Child. Since the The Mandalorian's second season is still scheduled to drop in October, and with the third season already in pre-production, fans have been flooded with both news and rumors about which pre-existing Star Wars characters are set to appear in the series, such as Ahsoka Tano, Sabine Wren, Bo-Katan, and the legendary Boba Fett.

These rumors and announcements aren't lost on celebrities who are also fans of the series. Actor Simon Pegg, known for his work in the recent Star Trek film series, the Mission Impossible series, and Star Wars: The Force Awakens, recently expressed interest in playing a character he wants added to the list.

In an interview with Collider, Pegg expressed he would love to the opportunity to play in The Mandalorian sandbox as the character of Dengar, a bounty hunter who first appeared in both The Empire Strikes Back and The Return of the Jedi but has also been seen in other Star Wars mediums.

As he explains in the interview, Pegg has voiced Dengar before in both Star Wars: Battlefront and in a few episodes of The Clone Wars. Since the powers that be in the Star Wars Universe are looking to utlize pre-existing characters in new projects, it's possible Dengar could reappear, especially if Boba Fett is involved since the two worked together in the past.