Even though the differing opinions and discourse surrounding She-Hulk: Attorney at Law on Disney+ have been varied, the series has succeeded in showcasing everyday life within the MCU and living up to the franchise's trademark of connections.

While She-Hulk's fifth episode was the first in the season to not include a post-credits scene, the credits included a sketch of Josh Segarra's Pug shopping for Iron Man Three shoes, as mentioned in the episode itself.

Not only was this a fun and relatable moment, but the background showed other shoes designed after Marvel heroes, including a few select characters that have yet to make their live-action MCU debut.

In the days following Episode 5's release, one of She-Hulk: Attorney at Law's directors responded to those Fantastic Four, X-Men, and Daredevil-inspired footwear Easter eggs.

When TVLine asked She-Hulk director Anu Valia about the choice to include shoes of heroes that have yet to appear in the MCU, which came at the end of Episode 5, Valia explained, "a lot of other minds had input there," but that she was not one of those minds:

“I can’t speak to that. All those Easter eggs in that drawing, a lot of other minds had input there, and I did not. So I can’t really speak to that.” 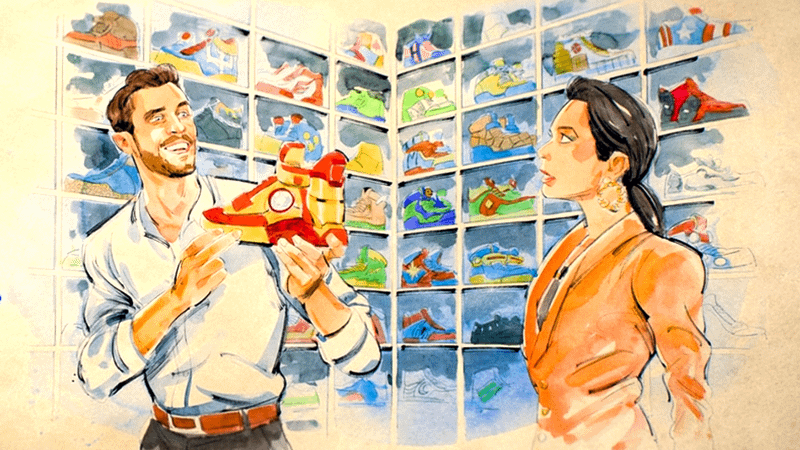 Both Deadpool 3 starring Ryan Reynolds and a Fantastic Four reboot directed by Matt Shakman are currently in development at Marvel Studios.

But apart from the animated revival of X-Men 97, Marvel fans have yet to learn when Marvel Studios intends to introduce the X-Men into the live-action MCU.

While the drawing certainly grabbed the Marvel fan base's attention, Pug's Josh Segarra sees the artwork as evidence of who his character is in the comics and in the MCU.

In fact, in talking with Rotten Tomatoes, Segarra claimed that his character's love of superheroes is "one of the things that defines Pug:"

“I think that’s one of the things that defines Pug, his protection of superheroes. [In the comics], Spider-Man saved him, so he will then save them for the rest of his life, you know? I’m excited to see what happens. Maybe we’ll get these made into a real shoe soon.”

In regard to the episode's lack of a post-credits scene, Valia had a response for that too.

Apparently, she, head writer Jessica Gao, and the Marvel team “played around with different versions” of the cut. But in the end, they decided that the tease of She-Hulk's costume and Daredevil's yellow mask was the best way to end the episode.

Also, despite the post-credits stingers fans have come to expect thus far, fans shouldn't count on them to continue as, Valia warned, "Some of the episodes will just end."

While She-Hulk's Daredevil tease definitely had fans talking, it wasn't exactly a surprise.

Audiences have known about Charlie Cox's upcoming cameo for She-Hulk: Attorney at Law for months. What they didn't know or expect was this artwork teasing Marvel characters from the Fox-Verse.

Even though it was a fun, relatable character moment for Pug's character, the problem now is that viewers still don't know if the reference was literal.

Was it just a fun wink at the fans who are eagerly awaiting these heroes? Or do the shoes mean these characters already exist within the MCU?

Despite having directed the episode, Anu Valia doesn't seem to know the answers herself, begging the question of who those "other minds" are and the meaning behind their decisions.

To further complicate matters, She-Hulk has already teased the existence of Wolverine in an internet story alongside an article about the canon events of Eternals and an ad for the Iron Man Threes.

For now, the status of the Fantastic Four, Deadpool, and the X-Men within the MCU continues to be a mystery. And, even though Marvel is clearly having fun with its various in-universe references, they are leading to more questions than answers for the show's fans.

New episodes of She-Hulk: Attorney at Law premiere on Thursdays on Disney+.