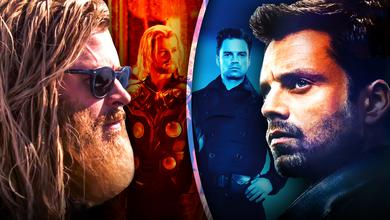 It's a new day for the MCU.

Phase 4 technically kicked off with WandaVision (since Black Widow STILL hasn't been released) and is now following up with The Falcon and the Winter Soldier, which recently debuted on Friday, March 19.

The first episode of The Falcon and the Winter Soldier focused on Sam Wilson and Bucky Barnes dealing with their respective pasts as the world struggles to carry on in the wake of the events of Avengers: Endgame.

Much like his character Bucky Barnes, Sebastian Stan understands better than most both the past and present of the MCU. Recently, he shared what it's like being one of the last OG Avengers still standing as the MCU moves forward into Phase 4 and the new frontier of series-style storytelling on Disney+.

In an interview with GQ, Sebastian Stan reflected on how he and Chris Hemsworth are the only remaining original characters left in the MCU and how it's something that he "couldn't be more thankful for."

“A friend of mine was saying, ‘It’s basically you and Thor left now.’ Look, I haven’t spent the time working it out, but if you think about it, between Robert [Downey Jr] as Iron Man [gone] and Chris [Evans], there aren’t many of the very first original characters left. Me and [Chris] Hemsworth might be the oldest ones around – which, I mean, I couldn’t be more thankful for!”

But according to Stan, what Kevin Feige and Marvel's writers have in store for his character always comes with Marvel's signature brand of secrecy and unpredictability.

He claimed getting an MCU script in a sealed envelope "feels like Pulp Fiction or something."

, "...whenever you’re involved in a Marvel project, whatever year, film or show, it’s always the same process: whatever country you are in, even with Covid, there are two people who show up with a sealed brown envelope. They sit there and hand you this thing and it feels like Pulp Fiction or something.”

In regards to his character's mortality, a recurring theme with Marvel these days à la Endgame and WandaVision, Stan always hopes to "make it to the end!"

"You sit there and open a file and there’s a script and then you’re like, ‘Oh, God. I hope I make it to the end!’ And every time you think, ‘This is gonna be it...’ And, so far, those experiences have felt like Christmas morning. But when it’s time, it’s time, you know?”

As they say, life imitates art, and that certainly seems to be the case with Sebastian Stan's Bucky Barnes and Chris Hemsworth's Thor.

Both characters are the last of the original MCU characters, coming in at 106 and over 1,500 years old respectively!

WandaVision was groundbreaking for Marvel as the studio's first Disney+ series and was largely considered a success, but The Falcon and the Winter Soldier is a very different show and more true to the MCU's typical, action-packed style. Time will tell how it compares and just how much it contributes.

In a way, it can be said that both Bucky and the MCU are in it together as they learn to balance the past with the present and come to terms with change.