Drax Creator Thinks Dave Bautista Could Be Recast In the MCU 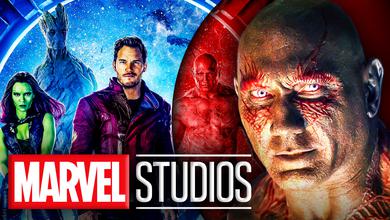 Marvel Studios has more than a handful of sequels planned for Phase 4 along with dozens of new entries coming into play including the highly-anticipated Guardians of the Galaxy Vol. 3. Arriving a full six years after Vol. 2 and nearly a full decade after the original film, this threequel is set to expand on the Guardians' universe in more ways than ever before.

Director James Gunn is almost certain that this will be his last outing with the team, of which the same could be potentially said about members of the on-screen team as well. The full group will be involved with both Thor: Love and Thunder and the Holiday Special preceding Vol. 3, but their status after this outing is very much a mystery going forward.

This is the case with one member of the team in particular: Dave Bautista as Drax the Destroyer. His future was once again the topic of discussion thanks to a chat with the character's legendary creator.

After past comments Bautista made about his character's arc somewhat falling by the wayside, Starlin agreed that "Rocket got more in his retelling" along with Thanos' daughter Gamora. Even with this, Starlin viewed Drax as "the best of the lot of those characters:"

“Rocket got more in his retelling, and Gamora got the lion's share of it... But I thought Drax was the best of the lot of those characters. He's certainly the comedic star.”

On the other hand, Starlin was alright with Drax's backstory not going as in-depth, describing him as "a big hulking brute who lost his family."

“I didn't think he needed any more to tell you the truth... It's pretty simple. He's a big hulking brute who lost his family.”

Starlin also echoed Bautista's previous sentiments about the Drax actor feeling like he's getting a little old for the muscular role, expressing that he "understand[s] hitting 54 and not wanting to take your shirt off anymore."

In the end, Starlin says he'd be satisfied if Marvel Studios decided to recast the role should Bautista, eventually make his exit after Vol. 3. Commenting on how "the Marvel Universe is going to keep trucking along," Starlin admitted that "there may be another Drax down the line" and only hopes the next actor "half the comedic timing" that Bautista has showcased:

“The Marvel Universe is going to keep trucking along and they found that they have made money on cosmic stuff. So they will more than likely are going to do more of it. There may be another Drax down the line; somebody else who hopefully has half the comedic timing of Bautista.”

A NEW DRAX ON THE WAY?

Jim Starlin certainly has the right to comment on the state of affairs in the Marvel Cinematic Universe, especially in Drax's case being the character's comic creator. He also helped introduce the Mad Titan Thanos in the comics and got his moment of MCU fame by making a cameo in 2019's Avengers: Endgame.

Dave Bautista has been open about his thoughts on Drax's MCU journey in recent weeks, although not all of it has been in the most positive light. Even while praising Marvel for being able to keep the MCU going as long as it wants, he's also admitted that the MCU dropped the ball on some of Drax's story and conceded that he may not be able to play the role forever.