Marvel Casts Borat Actress In Guardians of the Galaxy 3

Marvel Studios' Guardians of the Galaxy Vol. 3 has the chance to be the team’s biggest adventure to date as the entire cast returns for their next intergalactic story post-Avengers: Endgame. While this largely has to do with the story that director James Gunn has on the table, the film's all-star cast will help bring that vision to life upon its debut next year.

Sylvester Stallone already teased a return for his Stakar Ogord and the original Guardians from Vol. 2, which comes on top of top-billing newcomers from all corners of the entertainment industry. Gunn also brought two big names from the DCEU onto the MCU scene with Peacemaker's Chukwudi Iwuji and The Suicide Squad's Daniela Melchior, although both of their roles remain under wraps for the foreseeable future.

The excitement doesn't even stop there thanks to Will Poulter's involvement as the all-powerful Adam Warlock, and there are sure to be more inclusions in the 11 months until Guardians 3 comes to the big screen.

Now, another one of those announcements is out in the open as Gunn adds a key player in one of the biggest sequels in recent memory.

Deadline revealed that Maria Bakalova will join the cast of Marvel Studios' Guardians of the Galaxy Vol. 3, although her role remains under wraps. The Bulgarian actress broke onto the scene with her role in Borat Subsequent Moviefilm alongside Sacha Baron Cohen.

According to the outlet, Bakalova isn't the "unannounced actor" teased by director James Gunn when filming for the threequel wrapped.

Director James Gunn responded to the news, shocked that it took people so long to find out about the casting, while calling Bakalova "incredible:"

"Yes yes yes, okay, I guess I should be surprised it took you guys this long to get this one. Maria Bakalova is incredible."

Who Will Bakalova Play in Guardians 3?

Maria Bakalova had her breakout moment with Borat Subsequent Moviefilm two years ago as the titular character's long lost daughter, opening the door for incredible opportunities across the movie industry moving forward. Now, she joins the MCU's 31st film in a mystery role under Gunn, who will almost certainly keep news on that role a secret until the appropriate time.

The report indicated that Bakalova was on set for her role, unlike Bradley Cooper and Vin Diesel were for their roles as Rocket and Groot, so it seems most likely that she's playing some kind of alien as the galaxy expands further. This should rule out somebody like Lylla, Rocket's love interest from the comics, although Rocket's backstory is rumored to be pivotal to this threequel's plot.

Whatever her role turns out to be, fans will be curious to learn what she and her new costars are up to alongside the MCU's veteran intergalactic team as the franchise continues to expand. There's a chance her role could be revealed at D23 2022 or at this year's Disney+ Day, but Gunn will certainly ensure that fans are caught up on the truth behind any news the way he does on a regular basis. 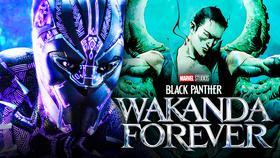