Margot Robbie Disliked a Harley Quinn Feature, So James Gunn Removed It For The Suicide Squad 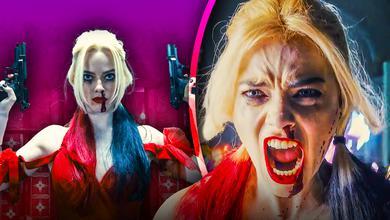 The DC Extended Universe is hoping to make a big splash this summer with James Gunn's The Suicide Squad, which will debut in theaters and on HBO Max in just under two months. With this movie coming as a semi-follow-up to 2016's Suicide Squad, Gunn is set to heavily expand on the wackiness and violence that naturally comes with so many villains.

While it's still unclear exactly if the DCEU outing is a sequel or a reboot, multiple characters from the original film will see an expected amount of character development before their next adventure.

Included in this group of regulars is Margot Robbie, who will make her third DCEU appearance after also starring in 2020's Harley Quinn: Birds of Prey. In her said solo outing, Robbie's DCEU anti-hero found herself sporting some interesting physical updates, both in terms of outfits and new ink.

This included an unexpected tattoo on her jaw that read "Rotten," which Gunn discussed in his most recent fan interaction.

A "ROTTEN" REMOVAL FOR HARLEY QUINN

The Suicide Squad director James Gunn took the time to answer some fan questions from an Instagram Stories Q&A concerning his first effort with the DCEU, specifically about Margot Robbie's Harley Quinn.

Gunn tackled the question of why Harley's "Rotten" tattoo from 2016's Suicide Squad and 2020's Birds of Prey was removed for The Suicide Squad, simply calling it a mutual decision between himself and Robbie.

Both of them realized they "didn't like it," so it was removed, and he also revealed that the change is "not addressed" in the movie:

Additionally, Gunn was asked if he would ever tackle a solo Harley Quinn movie, to which he admitted he "definitely would."

A MUTUAL DECISION BETWEEN DC STORYTELLERS

Margot Robbie and James Gunn seem to be quickly developing a rapport with each other in their first time working together, particularly with Gunn having praised Robbie so passionately in past interviews for her acting abilities.

While the "Rotten" tattoo seemed to help set Harley down her own path in Birds of Prey away from Jared Leto's Joker, the visual of it on screen brought mixed reactions from fans upon its release. Harley Quinn will still have plenty of tattoos, of course, but it's almost refreshing in a way to see that this one's removal was a fairly easy call between director and star.

As for Gunn directing a solo Harley Quinn movie someday, a story like that would absolutely fit into his wheelhouse considering his past work with Guardians of the Galaxy and his current DCEU projects, including John Cena's solo Peacemaker series. Robbie will likely stick around as the bat-wielding prankster for some time, and with Gunn in for the long haul as well, anything is possible.

The Suicide Squad will debut in theaters and on HBO Max on August 6, 2021.