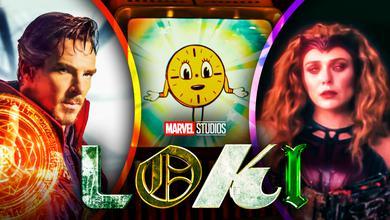 Loki has arrived and fans have been introduced to some of the wildest concepts the MCU has ever played with.

The Time Variance Authority, Timekeepers, and the sacred timeline are all factors in what is being called "the greatest power in the universe." What about the Infinity Stones though? Aren't they supposed to be the end all, be all?

For the first time in MCU history, audiences are being asked to forget everything they know in order to make way for a completely new game with a completely new rule book that the TVA is playing with.

These rules were presented in of Loki's first episode with a two-minute animated instructional video narrated by Miss Minutes.

Here is everything that was revealed through the animated history of the Time Variance Authority.

GETTING YOU CAUGHT UP ON EVERYTHING TVA

On June 9, 2021, the world was introduced to Miss Minutes: the mascot and spokesperson for the Time Variance Authority.

With a southern belle accent that makes fans want her to have a white streak in her hair (if she had hair), this is the character that answers the best Loki question there is: what in the world going on?

Miss Minutes is a vessel of information that head writer Michael Waldron has called "some of the most vital dialogue in the show."

The video begins with arguably the most important piece of MCU information in recent history: "Long ago there was a vast multiversal war. Countless unique timelines battled each other for supremacy, nearly resulting in the total destruction of, well, everything."

"Multiverse" is the hottest buzzword in comic book movies today. There is no world where the phrase "multiversal war" is used without invoking countless fan theories.

The multiverse conversation starts and ends with one name: Doctor Strange. With his upcoming sequel titled Doctor Strange in the Multiverse of Madness - a subtitle even hinted at by Miss Minutes when she references "madness" that could be caused by Nexus events - it's hard to believe that what happens in Loki won't impact the madness the multiverse is destined to fall into by March 2022.

Something the MCU has done with so much success over the years is introduce concepts in one show or movie that end up being a bigger focus of a future project. In the premiere episode of Loki, the seeds were planted for what is sure to be a major plot thread in Multiverse of Madness.

The next step of the video is the introduction of the all-knowing Timekeepers. These beings are introduced as the ones who merged the multiverses at war to create the sacred timeline.

This group is tasked with deciding which events in the universe are allowed to take place, meaning that nothing happens in the universe without the approval of these space lizards. This positions the Timekeepers as the most consequential beings operating in the MCU today.

While the Timekeepers do their best to keep the sacred timeline nice and tidy, accidents happen. These range from "being late to work, to starting an uprising you weren't supposed to."

When those things happen, a separate timeline branches off of the sacred timeline creating a nexus event, leaving the person responsible for creating said event as a variant of their original.

Nexus should be a familiar word in the MCU, as the final Wanda-conjured commercial from WandaVision featured "nexus capsules" as pills that allows its users to choose “the reality of your choice.” A major player in the comics, nexus beings are those who are "one-of-one" within the multiverse. Notable nexus beings in the comics include Wanda Maximoff, Vision, and Doctor Strange. The potential for nexus beings, like Wanda in particular, could throw a wrench into the plans of the masters of time, especially after WandaVision's post-credits tease.

When a variant steps out of their predetermined line, they need to be stopped before reaching that point of no return, which is why the Timekeepers created the Time Variance Authority.

The TVA is sent to enforce time law when variants step out of the path. This gives the apex of existence a bureaucratic feel that is set to be the driver of this show.

Once a variant steps out of place, they are replaced in the proper order of events, and then brought into the TVA to face trial for their crimes.

More information about the TVA and the mysterious Timekeepers comes every Wednesday, when Loki airs on Disney+.