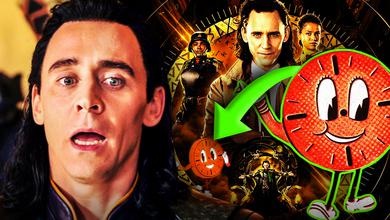 Marvel Studios’ third Disney+ original series, Loki, will release its first episode on the streaming service soon. Even though there will be no new MCU content in May, Marvel is doing plenty to hype up the upcoming show, including online watch parties of past movies on #LokiWednesdays from now until the show premieres and releasing a new poster for the series starring Tom Hiddleston’s God of Mischief.

The poster features several characters fans have seen as part of the Time Variance Authority, the organization Loki will be forced to work for during the series due to his escape with the Tesseract in Avengers: Endgame messing up the timeline.

However, there is one inclusion that many fans likely weren’t aware of until now: Miss Minutes, a character who head Loki writer Michael Waldron assures will be a favorite of "TikTok stans."

WHO IS MISS MINUTES?

Miss Minutes is an animated character who appears to be a sort of mascot for the TVA. She is an anthropomorphic orange clock whose face has eyes with visible eyelashes, a mouth, and possibly a nose in the form of the circle in the middle of her face where a clock’s hands would normally stem from...except she doesn’t have any, at least, not on her face.

Her arms and legs sprout from her perimeter and make her appear to look more like an old-style cartoon character (think Mickey Mouse, complete with the white gloves and only four fingers).

The new Loki poster is the most prominent Miss Minutes has been in promotion so far, but her presence in the series has been known for a while for those who knew where to look. She briefly appeared during a TVA scene in the show’s second trailer, and merchandise designs featuring her have been floating around the internet.

These designs have revealed a bit more about the character that could indicate her role and significance in Loki. Some of them have her depicted with what seems to be the TVA crest as well as its motto: “For all time, always.” Miss Minutes also appears to have a catchphrase of her own: “Woo-doggy!”

Another design depicts the character saying “Hey y’all!” Combined with her design and aforementioned “woo-doggy!” catchphrase, this may indicate that despite seemingly existing outside of time like the rest of the TVA, Miss Minutes is going to be a 1950’s-style cartoon character, not unlike other similar brand mascots of the time period.

It’s possible that Miss Minutes will play a similar role in Loki to that of fellow animated mascot Mr. DNA in the beloved blockbuster Jurassic Park. Mr. DNA served as a guide for both the characters and the audience by being the narrator of a cheesy film explaining how Jurassic Park came to be and how the scientists there cloned and manipulated dinosaur DNA to revive them.

Given that Marvel Studios seems to have made Miss Minutes purposefully over-the-top, there’s probably a good chance she’ll play a similar sort of part in Loki. A bonus to this could be her seemingly chipper attitude being the polar opposite of the God of Mischief, which could lead to some funny moments if he is forced to watch a video of her explaining how the TVA operates.

However, Miss Minutes’ fairly prominent presence on Loki's latest poster indicates she’ll be around for more than a one-off exposition scene, and her purpose could be even greater than simply being a guide to the workings of the TVA.

The merchandise design that likely provides the most context on the character’s role at the TVA is one that reads “Don’t forget to check in with Miss Minutes” on top, and written below the image of the character is “Brought to you by the Time Variance Authority.” This is followed once again by the “For all time, always” motto and the crest at the bottom.

The workers having to “check in” with Miss Minutes could mean a number of things. She could be the one updating them on happenings at the TVA and/or debriefing them before each time travel mission. If this is the case, viewers could be treated to a short video starring the character in each episode of Loki, likely providing some fun comedy to the proceedings of the show.

There’s also the possibility that these check-ins could also be in real-time, meaning Miss Minutes is a live being (or the avatar of one) that TVA workers actually interact with. This being the case could open up more fun possibilities for the juxtaposition between her and Loki but would also raise the question of who is behind the face of Miss Minutes?

Unless Miss Minutes is simply a sentient cartoon character (which is possible but unlikely), someone has to be making her say and do the things she does. This is the sort of system that seems like it could easily be taken advantage of, and it wouldn’t be too surprising if Miss Minutes - or at least, the mind(s) behind her - turns out to have sinister intentions.

Perhaps someone at the TVA wants Loki to fail, and they use the character to try to lead him astray from his tasks. Maybe Loki himself will eventually be the one manipulating Miss Minutes from behind the curtain.

Whether Miss Minutes plays a key role in the plot of Loki or is simply a source of comic relief, it’s likely she will be a fun and memorable part of Loki when the show premieres on Disney+ June 9, 2021.