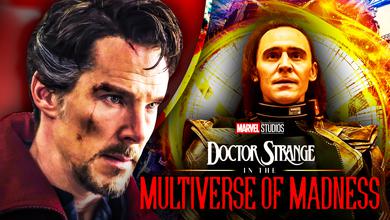 Loki, the new Disney+ show featuring Tom Hiddleston's God of Mischief himself, will soon be here! As fans prepare to sink their teeth into what promises to be a very important piece of the wider MCU, there are already those asking questions about how the new series will fit into the tapestry of upcoming Marvel projects.

While WandaVision's connections to Doctor Strange in the Multiverse of Madness were laid out from the beginning, some have wondered whether Loki, which will feature multiple timelines and potentially multiple realities, will be linked to the sequel as well.

The show's writer recently provided an answer to whether or not the new show will be required viewing to fully understand the upcoming film.

According to Inverse, Michael Waldron, lead writer & executive producer for Loki and screenwriter for Doctor Strange in the Multiverse of Madness, and most known for his work on Rick and Morty, gave a somewhat complicated answer to the question. When asked whether he thought the Disney+ series was required viewing, Waldron provided a bit of an open-ended response, “I think that it's all required viewing for everything."

Discussing the interconnectivity of the MCU properties, Waldron provided comments that slightly contradicted the ones he just shared, saying that Loki can be enjoyed, "if you've never seen an MCU movie."

“These stories are designed to stand alone and to be thrilling on their own, and to hopefully be complete stories. If you've never seen an MCU movie, you can check-in and watch Loki and just love it and be like, ‘I don't know who the hell that guy was, but it was cool.’”

Waldron does note that for both Loki and the Doctor Strange sequel, having seen previous Marvel films (and now the growing slate of Disney+ series) will "enhance your enjoyment."

“If you do know the MCU that will maybe enhance your enjoyment of it. I think that was our approach, and I think that's the MCU’s approach with everything.”

HOW CONNECTED IS LOKI TO THE WIDER MCU?

The question of how much Loki, which follows a version of Loki from the branching timeline created by the Avengers' attempts to collect the Infinity Stones in Avengers: Endgame, will connect to the wider MCU seems to be hard to answer right now. While it's difficult to speculate about the impact the show will have using what's known about the story, there have been plenty of statements from the show's creators that insist this isn't a simple spin-off.

While the Loki seen on-screen isn't the same one who was killed by Thanos in Avengers: Infinity War, it seems the Time Variance Authority that collects him exists outside or alongside reality in general. Therefore, Loki's task to repair the fractured timeline will indeed impact the main MCU continuity, which seems to be referred to as the "Sacred Timeline" by the TVA in-universe.

When one considers that alternate realities and timelines will be a major theme of Doctor Strange in the Multiverse of Madness (and Spider-Man: No Way Home, if rumors hold true), then it's easy to see how Loki fits into the bigger picture. Clearly, there will be ramifications for the extreme measures the Avengers had to take to defeat Thanos, and the ripple effect of the time-heist will play out across various films, perhaps even forming the main thread of the Phase 4 arc.

Loki will almost certainly touch on these themes and help provide viewers with a unique perspective on how time and the multiverse work in the MCU. The TVA works for the Timekeepers, three powerful "space lizards" who preserve the flow of time. It's likely those who work for them will have a better understanding of how meddling in time might set up the multiversal spill-over that's been teased for upcoming films.

If that's the case, then Loki will be required viewing for not only Doctor Strange but potentially Spider-Man: No Way Home and most definitely Ant-Man and the Wasp: Quantumania. Fans could very well be getting their first glimpse at a much wider universe when Loki hits Disney+ on Wednesday, June 9.