Loki Show Review: Why It's Worth Watching 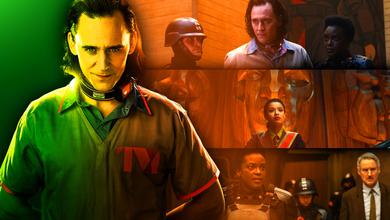 For anyone who hasn't heard, Wednesdays are now burdened with glorious purpose.

Fans are less than 24 hours away from Loki, and the God of Mischief solo series is primed to be the latest in a line of Phase 4 Disney+ triumphs for Marvel Studios.

Tom Hiddleston returns as the MCU veteran in a cast full of MCU rookies, and there has never been a better captain for the Loki team. Kate Herron gets behind the camera for a Michael Waldron script that gives fans a look at a new twist on a fan-favorite Phase 1 villain.

The trailers have played, the Marvel Legends episodes have dropped, and the interviews have been had and theories have been theorized. The MCU is back for its third series in less than six months. And, if there is one thing everyone agrees on, it is definitely worth a look.

THE RETURN OF GLORIOUS PURPOSE

As many fans already know, this show picks up right where Avengers: Endgame left off with Loki escaping with the Tesseract.

The return of the Loki from The Avengers is a welcomed sight as this is widely regarded as the "Best Loki" in Hiddleston's 6-movie run.

Tom Hiddleston is one of those actors that genuinely seems to love the character and his fans. Loki is as much a tribute to HIddelston's work as Loki as it is a supremely intricate elseworld story that gives a unique perspective on the God of Mischief that has never been seen.

THE BUREAUCRACY OF TIME IN THE MCU

While the concepts in Loki are large in scale and consequential within the MCU, Herron does an incredible job making it feel like a day at the DMV.

The story and tone of Loki are familiar with WandaVision in that the mystery of the TVA and the sacred timeline are a character all to themselves. Unraveling this show will surely provide the same level of questions, theories, and social media buzz that WandaVision gave fans.

The story has twists and turns and subverted expectations right away as episode one ends in a completely different place than it began. Filled to the brim with exploration and lessons to be learned, the world-building in the premiere sets the season up for a wild and unpredictable journey.

The tone and aesthetic of Loki are both the stars of every scene and subtle show elements at the same time.

The set pieces and tech of the Time Variance Authority create a world that keeps the story fresh and entertaining. Miss Minutes is sure to be an internet sensation by the end of the week.

The music of this show holds the emotional weight behind every scene and gives Loki an immediate and distinctive identity.

The subtlety and muted tone of episode one set the stage for a big leap viewers are bound to get in later episodes as this show grows and expands throughout the multiverse.

Unlike WandaVision and The Falcon And The Winter Soldier, Loki is the only returning piece of the MCU puzzle. Tom Hiddleston leads a team of new characters that help guide fans through this new corner of the Marvel Cinematic Universe.

Owen Wilson plays Detective Mobius, the middle man from Loki and the TVA. The first true conversational equal to Loki since a man named Stark, Mobius jumps off the screen immediately in every scene he is a part of.

Gugu Mbatha-Raw brings Ravonna Renslayer to life as a leader in the TVA. This deep-cut comic book character is giving us an unseen origin to Renslayer in Loki.

And, finally, the muscle known as Hunter B-15 is portrayed by Wunmi Mosaku and provides a military presence in this bureaucratic story.

WHAT TO EXPECT FROM LOKI

Loki opens the season with an introduction into an unknown and mysterious sector of the universe fans know and love.

The scale of this show far outweighs the simple and grounded tone it presents. This balance of taking grand concepts of the MCU and simplifying them into long lines and paperwork brings a unique style that keeps every fan on the edge of their seat.

Exploration is the main driver of episode one, but the script is the true star of the premiere. There is no telling where this series goes moving forward, but it is certain to be placed where no Marvel Studios project has gone before.