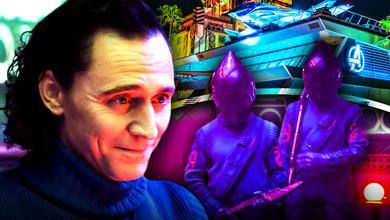 Marvel Studios is bringing something new and exciting nearly every week with its new venture on Disney+, which continues on Wednesdays this summer with Tom Hiddleston's Loki. With half of Season 1 still remaining, the God of Mischief is currently stuck in one of the biggest disasters of all time on Lamentis-1 as he works out how to survive alongside Sophia Di Martino's Sylvie.

Alongside everything happening on-screen within the MCU, Marvel fans now have a definitive increase in real-world experiences to enjoy from the still-running franchise as well.

Included in this is the newly-opened Avengers Campus, an expansive theme park addition centered around Marvel's top heroes at Disney's California Adventure in Anaheim, California. After an exciting opening ceremony that included some of the MCU's biggest names ringing in this debut, fans from all over the USA have flocked to Southern California to take in the sights, sounds, and delicious foods.

One of Marvel Studios President Kevin Feige's most intriguing comments from opening night described how Avengers Campus would never truly be complete as the MCU expands. As it turns out, the wait for confirmation on this only lasted a matter of weeks...

UPGRADES TO AVENGERS CAMPUS FOR LOKI

The park now holds replicas of the weapons used by the train guards on Lamentis-1 mostly when fighting Loki and Sylvie.

Other images included purple rocks reminiscent of the Lamentis-1 landscape as well as tickets taking influence from the ones Loki and Sylvie had to acquire to secure seats on the train.

Loki used his previously defined powers to disguise himself as a train guard to get himself and Sylvie aboard, negating the need for tickets in the end.

A NEVER-ENDING MCU EXPANSION IN ANAHEIM

Even considering how much content is planned for the next couple of years in the MCU, it's pleasantly surprising to see how quickly material from Loki made its way into Avengers Campus.

While it's unclear exactly where in Avengers Campus these artifacts are located, fans can be well-assured that Feige is keeping his word about the park's constant evolution. Considering these artifacts have only been canon for such a short amount of time, it's an impressive feat to already see them as something with which fans can interact at a theme park.

With three more episodes of Loki left to air on Disney+ and seven more MCU outings reportedly planned for the rest of the year, the possibilities for new additions to Avengers Campus are seemingly endless. For now, fans will keep their eyes open for anything else in the franchise's third Disney+ show that could find its way into the real world of California Adventure.