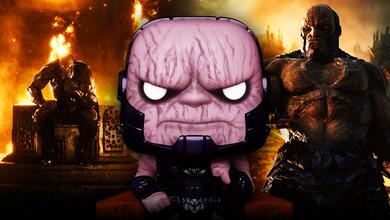 A full two weeks have passed since director Zack Snyder brought his true vision for the DCEU's Justice League to the world with the release of Zack Snyder's Justice League on HBO Max. Fans and critics alike have spent that time analyzing and dissecting all four hours and two minutes of footage, finding Easter eggs galore along with teases to what Snyder had originally planned for the franchise's future.

As is always the case with major releases like this one, the merchandising team for this extended movie is working hard to get fans all the commemorative items imaginable celebrating this release. This mostly came in the form of T-shirts and other clothing, but they did a great job teasing some of the revamped character designs that would come in the final cut of this adventure.

Now, the movie is taking the form of one of our favorite pieces of merch at The Direct: Funko Pops!

Funko took to Twitter to officially announce the arrival of new Pop! figurines from Zack Snyder's Justice League, which are now available to stream on HBO Max. Additionally, there are Pops available in both color and black and white, commemorating the black and white version of the movie entitled Justice is Gray, debuting soon.

All the figurines can be seen below:

Above are five of the colorized Funko Pops! from Zack Snyder's Justice League.

The group includes Diana Prince in her white outfit from the ruins, DeSaad, black-suited Superman, Darkseid on his throne and stroking his chin, and a second Darkseid standing and growling with his spear. The villains represented here even include mouths, which is a rarity for the Funko collection.

Some versions of these pops come in black and white, showcased above. The Zack Snyder's Justice League figurines will be available in August 2021.

COLOR? BLACK AND WHITE? BOTH?

Zack Snyder's Justice League became an overwhelming success upon its HBO Max arrival, which also translated into the world of merchandising, "where the real money from the movie is made." All of them, apart from Wonder Woman's, showcase characters or costumes that were missing from the theatrical cut of Justice League, and they have all had plenty of time to shine through the Snyder Cut's streaming run.

Darkseid and DeSaad were utilized as even bigger villains than Steppenwolf, who reported to both of them as he searched for and found the three Mother Boxes and the Anti-Life Equation. The snarls on both of their faces are perfectly intimidating, teasing their evil intentions through the course of the Snyder Cut.

On the hero side, it seems only right that Superman was featured in the highly anticipated black suit. Not only was this suit teased through the marketing campaign, but fans have also cried out for this particular Funko Pop!'s arrival for years already. The company clearly listened, and the end result looks impeccably cool.

All the aforementioned Funko Pops! are now available for pre-order. Zack Snyder's Justice League is currently streaming on HBO Max.