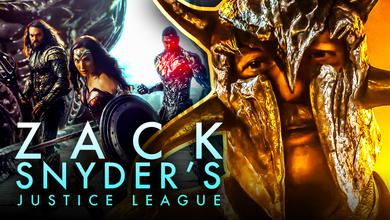 While the DC Extended Universe is looking forward to a rejuvenating return to theaters this summer, there are still plenty of stories coming to light about the franchise's first slate of movies from the last few years. One of those films that has spent a lot of time in the spotlight is 2017's Justice League, although it mostly hasn't been for great reasons.

This was a movie whose trailer was recently re-released by Warner Bros., which came to fairly disastrous results as it was the subject of intense negativity after Zack Snyder's Justice League dropped on HBO Max. However, the Snyder Cut did put the movie into a better light by expanding on numerous plot points from the original, even giving more depth to some of DC's important warriors in one of the film's flashback scenes.

This flashback sequence even included a key villain from 2017's other DC theatrical release, although not in the way anybody would have expected.

Actor David Thewlis, who portrayed Sir Patrick Morgan aka. Ares in 2017's Wonder Woman, took to Instagram to share an image from Zack Snyder's Justice League. Depicted is a shot of the movie's flashback battle with the Olympians, Green Lanterns, and Amazonians, which appears about one hour into the four-hour epic.

Thewlis' face can be seen as a younger Ares, though that's not Thewlis' body. Stunt performer Nick McKinless actually performed as Ares in the action pieces on set, and visual effects teams later stiched Thewlis' face onto McKinnis' body in post-production. Yes, this actually happened.

Thewlis made light of the bizarre situation in his caption, stating that he has "no recollection of this ever happening" and even joking about how "[his] left arm is so tiny" while handing over his ax.

"I would just like to say that I have no recollection of this ever happening - I assume it was before lockdown. I do not know these gentlemen and I have no idea why my left arm is so tiny. Anyone with further information please come forward."

The actor even included a hilarious response to a fan comment asking "Were you even on set for this film or did they just CGI your face from existing footage??!" The response was short and simple:

Thewlis' picture certainly highlights a strange decision by Zack Snyder and/or Warner Bros. to implant his face onto a bigger actor's body for the flashback scene.

His sense of humor shines through brilliantly in this post, clearly as confused as the fans regarding this massive change in looks for the God of War from 2017's Wonder Woman. With the actor not being on set for his mysterious appearance in the 2021 reimagining of DC's team-up adventure, CGI and VFX work played a role in delivering quite the funny moment for viewers.

Ares made a name for himself as the main antagonist of Wonder Woman, although his appearance in this flashback scene makes sense considering how many powerful beings teamed up to fight Darkseid the first time. While this mystery will likely remain unsolved on who made this decision, it's fun to see Thewlis having such a fun time with this unfortunate mishap.