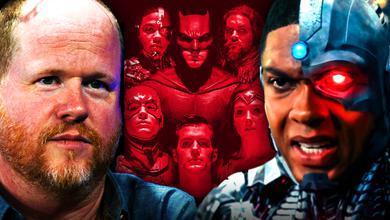 The Ray Fisher vs. Warner Bros. saga has been the talk of the DC Extended Universe fandom throughout most of the summer and fall of 2020. As Fisher continues to reveal more information at concerning the toxic environment of Joss Whedon's reshoots production of 2017's Justice League, the situation grows in complexity by the week.

According to FIsher, when Joss Whedon took Zack Snyder's directorial position on the DCEU ensemble, troublesome behavior permeated the film's development. Fisher has spoken at length describing the toxic and abusive relationship that he endured with Whedon and others on the set of Justice League, so much so that the situation has turned into full-fledged legal battle against both him and the team at Warner Bros.

More of this story has just released detailing some of the earliest indications of trouble brewing for this team-up epic.

In a new interview with Enosh Fett on the Poindexter Lounge Podcast, via YouTube, Cyborg star Ray Fisher revealed that Justice League director Joss Whedon refused to let him read the movie's script before the two met to discuss his role. When looking back on his DCEU experience, Fisher notes this as on of the "weird nuances of this situation" that acted as a sign for "not-okay" things to come when looking back on his DCEU experience:

"They wouldn't actually let me read the script until I met with him (Joss Whedon). And this would've been around the time of the Wonder Woman premiere. Yeah, no, they were like 'Joss doesn't want you to read the script until after you meet with him.' And I was like, well, that's weird cause I only came to Los Angeles to go to the Wonder Woman premiere, read the script, and then meet with him. So, there are a lot of weird nuances to this situation. But, that's kinda when I knew things were, creatively speaking, going in a not-okay direction."

Ray Fisher clearly feels he was deceived and led astray during his experience working on Justice League. Whedon has offered no comment on most of these accusations since they first came to light in early July, but this latest act comes across as something disturbingly intentional even for everything else Fisher has claimed about the filmmaker.

Fisher was looking forward to taking on a major role as the DCEU's Cyborg, even after Zack Snyder stepped down. However, Fisher's ambitions have likely changed with how Warner Bros. and Whedon himself have handled Fisher's accusations.

With the investigation into this abuse now reportedly over, it will be interesting to see what kind of consequences come down from this madness. Whatever the case, it's clear that Fisher still isn't pleased with what he had to endure during the tumultuous shoot for this blockbuster movie.