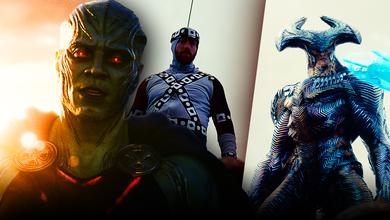 Fans of Zack Snyder's Justice League have essentially been shown behind-the-scene photos for years from Snyder himself. But, now that the film has officially released, artists who have worked on it have begun showcasing some too.

Such as a better look at DeSaad, who is Darkseid's advisor seen multiple times throughout the film speaking to Steppenwolf. Not only that, but fans were even shown Snyder filming both Ben Affleck and Joe Magniello's Deathstroke seen at the very end of the epilogue.

VFX PROCESS FOR STEPPENWOLF AND MANHUNTER

It begins with a stand-in for the CGI artists to use as a reference.

The characters are modeled, animated, and rigged as it is finally added to the shot.

The character models are then rendered onto the scene with proper textures and lighting.

Finishing touches for additional effects are done, such as the hologram in the below photo.

The meeting between Batman and Martian Manhunter at the end of the film was newly shot footage, but Harry Lennix was in New York at the time due to the ongoing pandemic, so the effects company had to be creative in how they got the reference for Lennix's performance.

“Since there was no facial capture system available that we could use, we set up regular witness cameras with good coverage of his face, as he was recording his dialogue. While it was an unusual way of capturing his performance, it actually worked pretty well and we were able to get good facial tracks from it.”

One of the bigger hurdles was that due to the pandemic, the team couldn't get a proper face scan of Lennix's face and modelers had to create it manually using picture references.

“Since the sequence was newly shot material and the restrictions surrounding COVID didn’t allow us to get a character scan of him, our modelers had to work primarily with picture references. Having Harry’s likeness retained in Martian Manhunter’s face helped translating his performance onto the digital character.”

Once finished, the team could render it, using the experience they had with similar characters like Superman.

“For Martian Manhunter’s costume design we referred to concept images and brought in some of our own ideas as well. For the cape simulations we could rely on our experience with Superman’s cape and use a very similar setup.”

Finally, due to the passage of time and the set no longer existing, the team had to recreate Batman's lake house too.

“Batman’s house on the lake doesn’t exist anymore, so we had to create the environment digitally. We had the lidar scans in our backup of Batman v Superman, which allowed us to recreate an accurate digital version of the house as well as the surrounding area.”

It's easy to see from the photo Scanline VFX provided Before & Afters that Harry Lennix had to apply impromptu facial tracking signified by the white dots all over his face. This makes it easier for artists to use as a reference, specifically for the animation, to track the facial movement of Lennix's performance properly.

The additional hurdle of recreating Batman's house was thankfully mitigated by them having lidar scans of the set from their time working on Batman v Superman: Dawn of Justice. It is great to see these artists be resourceful with such limitations put upon them, but it seems like it paid off with many fans enjoying Manhunter's cameo and greeting to Bruce.