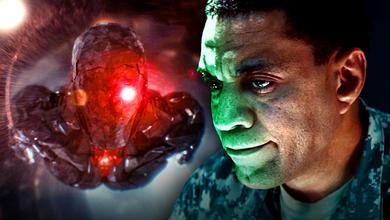 Zack Snyder revealed years ago that he had initially planned to show that Harry Lennix's character, Calvin Swanwick, was secretly Martian Manhunter in 2017's original cut of Justice League. Snyder explained that “I was able to shoot all of it except for the Harry Lennix side,” which fell through when Snyder left production.

Eventually, with support from fans and an ongoing pandemic halting movie productions, Warner Bros. finally gave Zack Snyder the chance to release Justice League as he originally intended. Snyder soon showed off concept art for Martian Manhunter and was even able to get Lennix to film his part of that cut scene from so many years ago.

A new post from Zack Snyder has given fans another tease of Manhunter and his role in Justice League.

Another image from Zack Snyder's Justice League has been uploaded by the director himself on his social media account showing a design for Cyborg only seen in very early trailers for the movie. It is accompanied by a quote from Martian Manhunter that reads, “There's a war coming.”

HOW LARGE IS THE MANHUNTER'S ROLE?

It seems likely that Harry Lennix's Martian Manhunter won't have a substantial role in Zack Snyder's Justice League, as it seems apparent that he will be sticking to the sidelines and being vigilant. Maybe Manhunter will be acting as a harbinger of doom by the end of the movie, hence the ominous warning of war coming.

As for what Lennix shot with Zack Snyder and his team, it couldn't have been more than a minute of footage since Snyder has confirmed that he only filmed four minutes of brand-new footage.

That doesn't mean that there isn't more footage of Martian Manhunter that Snyder intended to show, as he could have archival footage that was just never used in the theatrical cut of the film. It will be interesting to see the exact context to Manhunter's inclusion when Zack Snyder's Justice League is released on HBO Max March 18.