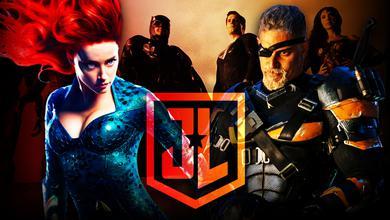 At this point, it's no secret that Zack Snyder's Justice League will be very different from the disappointing theatrical outing of the film back in 2017. The new cut of Justice League has been confirmed to be a four-hour-long affair, meaning that there will be extended scenes and expanded character moments to propel the narrative even further.

One of the highly-talked-about sequences that will be included in Snyder's version is the Knightmare timeline that was introduced from 2016's Batman v Superman: Dawn of Justice. This post-apocalyptic future is expected to play a pivotal role in the director's cut, potentially providing clues on how the powerful superhero team lost to the forces of Apokolips led by Darkseid.

Now, a brand new look at some of the characters that will be included in the sequence has been revealed.

Twitter user @accidentallydan posted several photos of the Knightmare costumes of Mera and Deathstroke that were taken from an exclusive exhibit for Zack Snyder's Justice League in Dallas, Texas.

Update: These photos have been removed from Twitter. Descriptions of the pictures can be read below:

Joe Manganiello's Deathstroke was seen sitting inside an unknown base while sporting the character's familiar mohawk. Alongside the villain, snippets of Ben Affleck's Batman and Jared Leto's Joker were also included.

Amber Heard's Mera was pictured in her Knightmare outfit, holding what appeared to be a gas canister of some sort along with an Atlantean spear.

AN EXPANDED CAST OF DC CHARACTERS IN KNIGHTMARE SEQUENCE

In order to complete and improve the Snyder Cut, the visionary director assembled several cast members in order to do reshoots for Justice League, and it was later revealed that it was mainly for the Knightmare timeline. This latest reveal provides a sneak peek at how it all went down, and the surprise inclusion of Amber Heard's Mera and Joe Manganiello's Deathstroke seemingly hints that this sequence will be consists of an all-star lineup of DC characters.

The costume of Mera stays true to its Atlantean roots, and the inclusion of the blasters that were featured in Aquaman is a great bonus. Meanwhile, Deathstroke's protective suit appears to have been a victim of wear and tear, seemingly hinting that the villain has fought a plethora of parademons along the way.

It remains to be seen how the Knightmare timeline will be re-introduced in Zack Snyder's Justice League, but it's reasonable to assume that it will be done through the perspective of Bruce Wayne. The brief dream sequence from Dawn of Justice didn't give much context on what's really happening, but the addition of this timeline to this Justice League can finally pave the way for more answers about the doomed future of the heroes.

Interestingly, Snyder did confirm that the Knightmare timeline would've been the premise of the Justice League sequel, and it seems that the sequence from the first film will give fans a taste of what's to come.

Sadly, a follow-up is not (yet) in the works, but this sequence can still provide clues on how the heroes recover from their loss to Darkseid in that specific future. For now, fans can only take a peek at the Knightmare costumes of these characters before the actual live-action debut in Zack Snyder's Justice League this month.