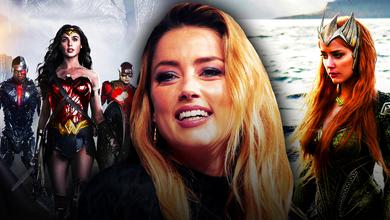 Zack Snyder's Justice League was made available for public viewing on HBO Max almost two weeks ago, with fans and filmmakers alike still deep in conversation about the results of this do-over. Thanks to the new edition of the team-up movie having a whopping four-hour run time, there is more than a fair share of material to digest as fans look for how the film differs from its 2017 predecessor.

Included in the extended run time were appearances by classic DC characters that were underutilized in 2017's Justice League or completely left out altogether. A lot of this was pulled together in the Knightmare Epilogue sequence, which featured appearances from Joe Manganiello's Deathstroke, Jared Leto's Joker, and Amber Heard's Mera alongside the core group of heroes.

In a new behind-the-scenes look, one of these stars is shown having quite the good time during filming.

Celebrating her 1000th post on Instagram, Justice League actress Amber Heard posted a video of herself struggling to stand up while in her full Mera costume in her on-set trailer. The video ends with Heard knocking over a coffee cup as she smiles and enjoys the experience.

"A little set life exclusive of Mera in honor of my 1000th Instagram post. She’s beauty and she’s grace... 🎶"

HEARD TAKING IN EVERY BIT OF THE SNYDER CUT

Amber Heard's role as Mera was expanded upon in both of her scenes from Zack Snyder's Justice League. Her fight against Steppenwolf and meeting with Aquaman was expanded upon and she also played a key role on Batman's team in the Knightmare sequence as they confronted Jared Leto's Joker.

It's clear that Heard has had a great experience bringing the future queen of Atlantis to life within the DC Extended Universe, which she was able to bring even more depth to in 2018's Aquaman alongside star Jason Momoa. She has also expressed her excitement to return to the franchise in 2022's Aquaman 2, and it will be exciting to find out where Warner Bros. takes her story in the next adventure.