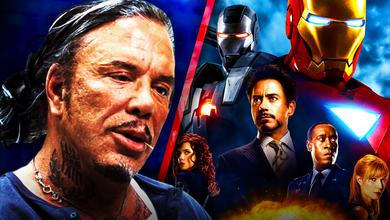 Marvel Studios has a history of hiring the best names in Hollywood to play roles in its superhero blockbusters, bringing a higher level of quality to every story. This started as early as 2008 with Iron Man, which starred Robert Downey, Jr. before his rise to superstardom, and it continued with every movie to come since then.

Even with the franchise's overwhelming success, the early movies ended with a handful of actors who didn't want to come back for the future due to various reasons. This includes notable examples like Edward Norton leaving the role of Bruce Banner after The Incredible Hulk and Terrence Howard vacating Iron Man 2 after a very public dispute over salary.

While most of these instances have come and gone through the years, one former MCU star still seems to hold a grudge for his experience...

NO LOVE LOST FOR MICKEY ROURKE

Iron Man 2 star Mickey Rourke took to Instagram to post a picture celebrating the stars of Law & Order: Special Victims Unit. At the end of the lengthy posted celebrating the series' actors, Rourke included a vulgar jab at Marvel:

Respect to all of you, the work that you all do is real acting, not like that crap that all on Marvel shit.

SOME BAD MEMORIES FOR WHIPLASH

Rourke's experience with Marvel dates back to 2010 when he played Ivan Vanko in Iron Man 2, Marvel Studios' third movie within the MCU. Not only was this film regarded as one of Marvel's somewhat weaker entries, Rourke's comments about Marvel Studios and the movie made for an even more uncomfortable situation.

The actor spoke of how he wanted to add more depth and complexity to his villain, clashing occasionally with writer Justin Theroux and director Jon Favreau. It's unclear which side of the argument is correct, but Rourke clearly still holds a grudge against the comic book movie juggernaut for forcing Vanko to be a "one-dimensional bad guy."

With the Iron Man 2 big bad having been killed off in that movie, there wouldn't likely be a need to bring him back even if Mickey Rourke was open to returning. Even so, it's eye-opening to see how his experiences with the MCU still stick with him more than a decade later.

Iron Man 2 is available to stream on Disney+.