After Lucasfilm released the first trailer for Indiana Jones 5, fans shared their reactions to seeing Harrison Ford being de-aged.

Ford's fifth Indiana Jones movie has been a long time coming for the 80-year-old star as he looks to bring the iconic action hero back for one final ride with Disney and Lucasfilm. The studios brought the first look at this new adventure at the 2022 D23 Fan Expo in Anaheim this past summer, showing off a number of new costumes and teasing what's in store for the cast of Ford's latest action effort.

While fans have been concerned about the movie thanks to reports about early test screenings not going well, director James Mangold has reassured the viewers that everything is being done to make sure this movie sticks the landing.

And now, fans officially have their first look at what's on the way for Indiana Jones 5 thanks to its first trailer coming from CCXP 2022, complete with a new title and an exciting look at Ford going through a round of de-aging.

Lucasfilm officially released the first trailer for the fifth Indiana Jones movie, which is titled Indiana Jones and the Dial of Destiny. The trailer even included a shot of leading actor Harrison Ford de-aged for a flashback scene, taking a few decades off of his look for the new movie.

The de-aged Ford was also shown in his usual Indiana Jones attire, marking a second outfit worn by the young adventurer, potentially indicating a larger portion of time spent in flashback moments. 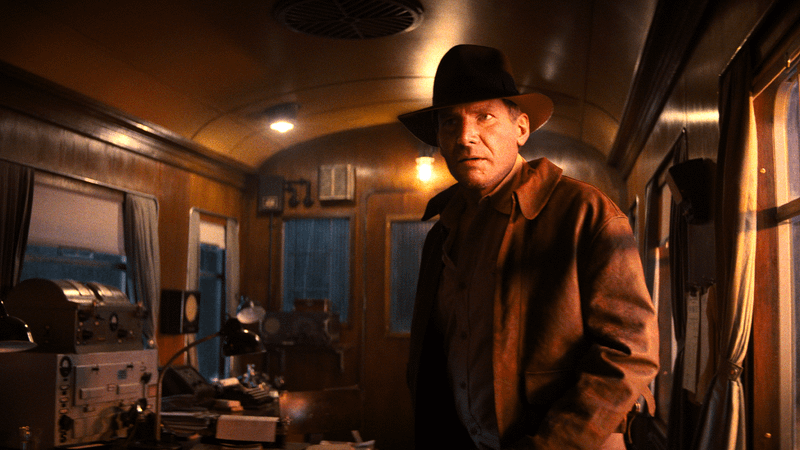 The trailer also showed plenty of Ford in his present-day form, prominently featuring the 80-year-old star in his latest outing as Henry "Indiana" Jones.

Following this reveal, fans shared their thoughts on what Lucasfilm delivered for Indiana Jones 5.

@sam_berghammer is all in on this movie, calling the de-aging "a little weird" but still looking forward to seeing what happens:

"Oh my god. Im so in. The de-aged Harrison Ford looks a little weird and there seems to be alot of it, but still, Im in."

The Direct's Jack McBryan called the de-aging effects for Ford "scary good" in the new trailer:

@DropTheMike53 expressed a great deal of faith in the movie, noting that the de-aging on Ford "looks amazing:"

@nath_n123 admitted to being "very skeptical," although they said that Ford looked perfect in his de-aged form:

@nottheanakinway thought the show was "a still from an older Indiana Jones movie," highly impressed by the CGI work:

"De-aged no way????? At a quick glance I looked at this and thought this was a still from an older Indiana Jones movie. Wow fantastic cgi work there."

Screen Rant's Molly Freeman described the sound she made when she saw Ford's reveal as one she would have made with "a jump scare:"

Barstool Sports' Matt Fitzgerald had his mind blown seeing the effects used on Ford to age him down:

@hunterharjo7 said that the de-aging on Harrison Ford "looked scarily good" while praising the movie's trailer for capturing "the magic that felt missing" in 2008's Indiana Jones and the Kingdom of the Crystal Skull:

"Indiana Jones 5 looks so good, trailer alone captures the magic that felt missing in Crystal Skull. Also the de-aging CGI on Harrison Ford in the flashback scene looked scarily good. This has gotta be on my most anticipated movies list"

De-aging technology has come to be incredibly useful for major studios in the blockbuster movie business, especially when it's been done effectively for major characters like Doctor Octopus and the other villains in Spider-Man: No Way Home, for example. While it's unclear how much it will be utilized in Indiana Jones 5, these shots of Harrison Ford's blast to the past already have fans impressed and looking forward to what will come in the rest of the movie.

Looking at the footage itself, Disney and Lucasfilm put forth their best effort to make sure Harrison Ford looked as accurate as possible, which is easier to do for him than most actors with four previous movies starring him as Indiana Jones. Now, the big question will be how much this de-aged version of Ford will be used throughout this story, all while the fifth Indy movie likely ties his adventures as this character off in a neat little bow.

Indiana Jones and the Dial of Destiny will debut in theaters on June 30, 2023.

Michael B. Jordan Made Decision to Change 1 Killmonger Detail in Black Panther 2
Tags: Indiana Jones and the Dial of Destiny / Harrison Ford /