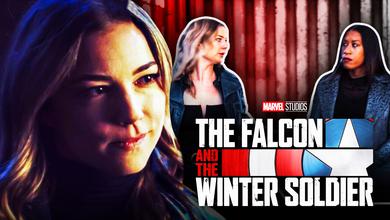 Marvel Studios’ second Disney+ exclusive, The Falcon and the Winter Soldier, has taken more than a few twists and turns to get to the halfway mark of its story. Sam Wilson’s relationship with Bucky Barnes has quickly been put through the wringer as they tackle a new world with unexpected threats from nearly every angle.

“Episode 3” brought back a couple of familiar faces to throw even more of a loop with Daniel Brühl’s Helmut Zemo and Emily VanCamp’s Sharon Carter. Both characters have not been seen in the MCU since 2016’s Captain America: Civil War, and it's clear that they have both changed to some extent with everything that’s happened in the MCU during their seven-year absence in the timeline.

That change was something that was very appealing to VanCamp in her return, as she revealed in her most recent news blast.

Variety had a chat with Sharon Carter actress Emily VanCamp, who spoke on numerous aspects of her experience with Marvel Studios' The Falcon and the Winter Soldier on Disney+.

VanCamp revisited Marvel Studios' pitch for the show, in which she loved the idea of the series revealing "what we’ve seen and we haven’t seen for Sharon" in her MCU journey to date. With so many unknowns, she seems to enjoy how many "crazy ideas" are available to tackle in Phase 4:

"When [executive producer] Nate Moore called to pitch the idea, what I love is he’s been on the journey, too, and I think had a very similar perspective as to what we’ve seen and we haven’t seen for Sharon. Because obviously, she’s had to be on the run. We don’t know where she’s been. All of these kind of crazy ideas to explore."

Speaking on how disillusioned Sharon had become since her last appearance, VanCamp confirmed that there's "quite a bit more edge to Sharon than we’ve ever seen" after being on the run for such a long time. With this new version of Agent 13, VanCamp remarked that it's "kind of cool to see that chip on her shoulder" as she fends for herself:

"Through a lot of conversations, because it could have really been anything. What we do know is she sacrificed a tremendous amount for the cause. When she’s on the run, we don’t know where she’s been, but certainly you can imagine there would be some sort of, you know, I mean — how do I put it? There’s quite a bit more edge to Sharon than we’ve ever seen. She’s not that wide eyed young agent anymore. She’s a little rough around the edges. Do we find out exactly what she’s had to do in order to be where she is now and survive? No. But we get a sense that it hasn’t always been easy, and that the sacrifices she’s made weren’t always worth it in her mind. That was kind of cool to see that chip on her shoulder that we never really did see before."

VanCamp also commented on how different the MCU can be from its comic counterparts at times, especially with the case of Sharon Carter turning a little darker in this series. Calling it "a beautiful thing" that Marvel "allow(s) you to kind of create your own version of the character within the MCU," VanCamp appears to be all-in on bringing a new depth to this classic comic character on Disney+:

"And that’s where you trust Marvel at the MCU, which is different than the comic books. They give you this Bible for your character of the different versions of the character from all the different comic books. It gives you a jumping off point, but really, the beautiful thing is they allow you to kind of create your own version of the character within the MCU, and they do that with the story as well. You get this fundamental idea of who the character is, and I tried to implement into films who Sharon was — that deep respect, and sense of integrity and loyalty that she has. Then to strip away that after being in her mind quite wronged — to put that on its head was just a really fun idea to me. There’s still a few more episodes to see where we go with that, but it was just fascinating that we would take a different route completely with her."

Fans got just a taste of what Sharon Carter has had to endure since she first went on the run in the Captain America threequel, setting her up as a fugitive after the Sokovia Accords went into place. She cut off ties with her family and hasn't set foot in the United States for years, all after dealing with the loss of her accomplished aunt, Peggy Carter.

It was almost jarring for viewers to see her pessimism towards Sam and Bucky's new situation, and she has no qualms for the moment about making the best of her current situation in Madripoor. There is still plenty of her story to explore, especially considering the situation with the newly-introduced Power Broker, and the hope is that she will find herself again and a way to help her lost friends.

Sharon's story will continue when "Episode 4" of The Falcon and the Winter Soldier debuts on Friday, April 9. The first three episodes are available to stream on Disney+.