Ever since The Falcon and the Winter Soldier was announced, fans have wondered how exactly the show was going to handle the mantle of Captain America — especially since the last time we saw Chris Evans' Steve Rogers, he had grown old and lived the life he had always wanted. With the show having now aired its debut episode, fans are getting a better understanding of exactly where Cap's story ends.

A key question remains though: what really happened to Steve Rogers? Where did he go after handing off the shield to Sam on that bench behind the former Avengers Compound. The way Spider-Man: Far From Home handled it made it seem as if Steve had died (or at least that's what the public was led to believe).

Though after the premiere of the show , things remain unclear. However, if fans keep a keen eye while watching through the series, they might be able to see some details hiding in plain sight.

IS STEVE ROGER ALIVE IN THE MCU?

In the first episode of The Falcon and the Winter Soldier , the audience is treated to a scene where Don Cheadle's James Rhodes and Anthony Mackie's Sam Wilson walk through a Captain America memorial exhibit as they discuss the mantle that Steve left behind. Within that exhibit, there is some interesting information to be found when looking closely at particular panels on display.

On one part of the exhibit, there is a quote explaining what exactly happened to Chris Evans' Steve Rogers following the events of Avengers: Endgame :

"With the death of Tony Stark, Steve Rogers honored his friend by finally retiring and laying down his shield, enjoying the world he had fought so hard to protect. With this exhibit we honor the life and legacy of Steve Rogers, Captain America: patriot, soldier, hero." 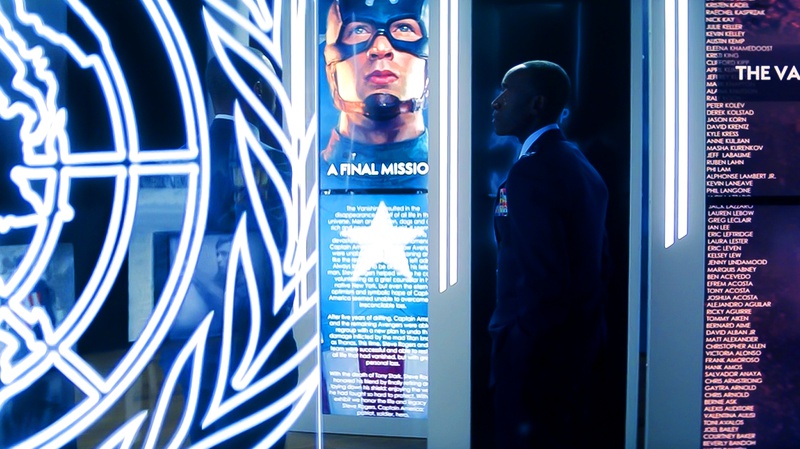 Credit to @Bork_22 on Twitter for sharing this with The Direct.

THE LEGACY OF CAPTAIN AMERICA

While seeing the information that the Captain America exhibit provides does provide some more context for the audience, whether Steve Rogers is alive still remains a very uncertain topic. If this information is to be taken as fact, it certainly alludes to the fact that Steve is still alive somewhere out there after just having gone into a secret retirement. The problem is that fans don't know what's true or what's simply a cover for the public.

Even characters within the MCU seem to be having trouble finding out what really happened. In the first episode of The Falcon and the Winter Soldier , Agent Torres mentions to Sam all the many Captain America conspiracy theories out there. Including one where Steve Rogers is secretly hiding out on the moon. While one could hope that is a sly and devilishly clever reference to the existence of the Inhuman Royal Family , the truth its likely just meant to drive home the point that even the world doesn't have any idea what happened to Steve Rogers.

Will fans ever get a straight answer? It's hard to tell. Marvel Studios seems to be holding strong on their vagueness of the situation, perhaps keeping the door open for a potential return despite its stance that Chris Evans is done . However, it's been proven many times over the years that anything is possible within the Marvel Cinematic Universe.