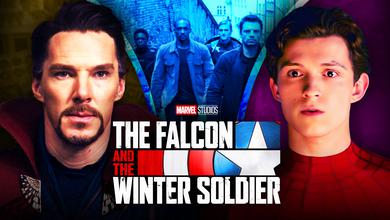 The Falcon and the Winter Soldier is inching closer to its season finale on Disney+ for Marvel Studios after six weeks of thrilling action. MCU regulars like Anthony Mackie and Sebastian Stan have had the opportunity to shine in this post-Endgame outing, although the series has introduced a host of new faces to the Phase 4 party.

Included in that group of newbies is Danny Ramirez, who has quickly made an impression on Marvel Studios with his work as Lieutenant Joaquin Torres. Ramirez has only seen a limited amount of screen time in parts of three episodes, but the new soldier is proving himself to be quite the friend to Sam Wilson before he likely becomes a true ally in battle.

While Ramirez and Mackie are surely building some solid chemistry on-screen in the series, the Falcon is far from the only Marvel character Ramirez would enjoy joining forces within Phase 4.

In an interview with ComicBook.com, The Falcon and the Winter Soldier star Danny Ramirez spoke about some of his dream Marvel crossovers for Lieutenant Joaquin Torres. While he admits he's riding with Sam Wilson for the time being, he reveals that he'd "have a lot of fun throwing down with Tom Holland," even if they only explored the dynamic for a scene or two together:

"Well, Sam is my answer. He'd be amazing to team up with. I read a lot of fan theories, I think I'd have a lot of fun throwing down with Tom Holland, just like a scene together and not throwing down in a fight, but like a scene together, it would just be pretty funny I think. I think it'd be pretty dynamic. So that's been kind of one that I'm like, 'Oh, I'd love to to work with him across the board.'"

Along with the Spider-Man star, Ramirez fantasized about other top-notch MCU actors like Benedict Cumberbatch as Doctor Strange and Tom Hiddleston as Loki. Praising the fact that there are "so many phenomenal actors in the MCU," it seems as though he would enjoy having his pick of whom to share screen time with in the future:

"I think Benedict Cumberbatch is a phenomenal actor to work with... Tom Hiddleston...Yeah, there's so many phenomenal actors in the MCU that I think, across the board, I'd be like any way to get involved in their stories or in a scene with them, I think I'd definitely take the opportunity."

JOAQUIN TORRES AND ANY MCU HERO: A DREAM DUO

For all the support Danny Ramirez appears to be receiving from Marvel Studios early in their relationship, Ramirez is clearly showing that same appreciation for the comic book movie universe in which he's firmly entrenching himself.

His picks for who he'd like to team up with in future movies may not be the most realistic at the moment, but nothing should be out of the question as the MCU continues to grow. The trio of British stars have made quite a name for themselves playing three of the franchise's most popular characters to date.

Tom Hiddleston's Loki is about to set off on his own dimension-jumping solo adventure centered on the 2012 version of himself in Disney+'s Loki. Meanwhile, Doctor Strange and Spider-Man both have highly-anticipated sequels on the way that are going to blow the roof off the MCU with the multiverse coming fully into action within the next year.

As for Ramirez, he will continue in the season finale of The Falcon and the Winter Soldier, which premieres on April 23.