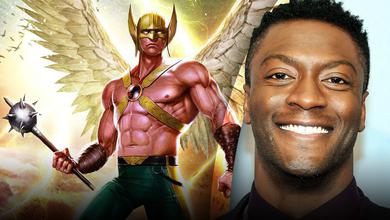 During the Black Adam panel, Johnson revealed that the Justice Society would be appearing in the film, who will be attempting to battle against the ancient villain. One of the DC heroes confirmed to be in Black Adam's Justice Society was Hawkman, and now, a new report has revealed the actor who may be bringing the character to life.

According to a report from The Hollywood Reporter, actor Aldis Hodge, known for his roles in City on the Hill and The Invisible Man, is currently in final negotiations to appear as Hawkman in Black Adam.

A follow-up report from The Wrap claims that Black Adam's version of Hawkman will be adapting Carter Hall, the archeologist who discovers he's the reincarnation of an Egyptian prince, as opposed to the updated characterization of Katar Hol, the alien from Thanagar. More specifics on the character could not be revealed.

So the cat’s out of the bag 😎. @therock, it’s going to be an honor to join you, @ncentineo and the #BlackAdam/#DCU family 🙌🏿🙌🏿🙌🏿. Let’s goooooo!!!! @thehollywood_reporter link is in the bio🔥

Hawkman will finally be flying to the big-screen. The character first appeared in 1940, and throughout his long comic book history, Hawkman has also appeared in various animated films and live-action DC series. Fans of the superhero were excited to hear that Hawkwman would face off against Dwayne Johnson in Black Adam, and now that an actor is attached to the role, that dream is quickly becoming closer to reality.

It's interesting to note that Black Adam will feature the Carter Hall version of the character. Carter Hall was the initial iteration of Hawkman, being a charter member of the Justice Society. It seems as if Black Adam will be going back to the Golden Age of comics with its slate of characters, and it will be exciting to see a film adaptation of the classic world of DC.

Aldis Hodge's Hawkman will be joining Noah Centineo's Atom Smasher, and all that's left to be revealed is who will portray their allies, Cyclone and Doctor Fate. Though, with Black Adam set to begin filming in early 2021, more casting news should be on its way soon. Given that these characters will be going up against the extremely powerful super-villain Black Adam, DC will surely be bringing in actors that can pack a punch.