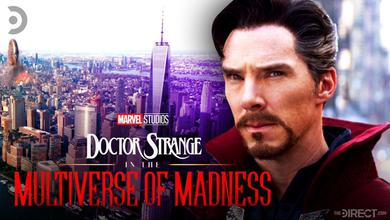 Being on-location is everything for a movie.

While CGI has improved tenfold over the past decade, fans always appreciate films that use tangible sets and real environments for shooting.

Marvel Studios infamously love their green screens. From the entire third act of 2012's The Avengers to Nick Fury's tranquilizer from Spider-Man: Far From Home, the MCU is not shy to utilize modern technology.

Marvel sure does love their CGI, but they also favor on-site shoots.

According to insider Christopher Marc, Doctor Strange in the Multiverse of Madness is still set to use Longcross Studios in Surrey, England for its "homestead stage location," but they intend to do exterior filming in both New York City and Norway.

Longcross Studios in Surrey, England is still the homestead stage location for DOCTOR STRANGE 2 as I previously confirmed and looks like Marvel will attempt to do the exterior filming in NYC and Norway as previously planned before the pandemic. pic.twitter.com/UvkEAsYF6I

After over five months of indefinite pause, Marvel Studios is getting back to work.

It's public knowledge that MCU Disney+ shows are planning to resume production very soon, but getting tangible news that a Phase 4 flick has locations scoped out and ready to shoot is very relieving.

With the current unpredictable state of the world, it would be easy for Kevin Feige to ask Disney for another truckload of money so they could effortlessly shoot entire movies on a sound stage. Sure, Doctor Strange 2 will utilize its fair share of CGI, but knowing there is a plan to get authentic exterior shots from real-world locations is refreshing.

The MCU sets itself apart from other universes in many ways, but one that has always stuck out is it's 'real world' feel. These heroes live in cities we are all familiar with, from Brooklyn and Queens to Malibu and San Francisco. Sure, planets like Xandar and Nidavellir are (probably) not real, but everything about Earth feels legitimate. Relating to these larger-than-life characters is a whole lot easier when it feels like they live in a world we are all familiar with.

Doctor Strange 2 heading to NYC and Norway further emphasizes that long-standing MCU narrative. Shots in the concrete jungle are likely for Strange's Sanctum Sanctorum, but Norway remains to be seen.

Fans will recognize Norway as an MCU location rooted with Asgardian history. There, Odin fought the frost giants, Johann Schmidt claimed the Tesseract, and the Asgardian refugees built New Asgard. Stephen Strange is no stranger to the God of Thunder, so perhaps his sophomore solo flick will bring him to the place defined by its people.

Doctor Strange in the Multiverse of Madness is set to hit theatres on March 25, 2022.