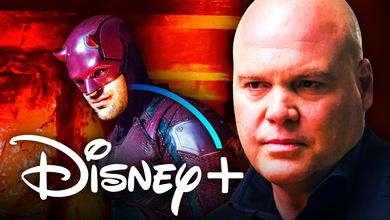 Out of all the former Marvel Netflix shows, it wouldn't be a stretch to say that Charlie Cox's Matt Murdock was the most popular of the bunch. Daredevil's gritty and violent take on the character resonated with fans in a way that the 2003 film never did.

Not only was the show known for its incredibly choreographed and realistic fight sequences, but Cox's portrayal of the blind vigilante was arguably on the same level as Robert Downey Jr. is to Tony Stark. Even Marvel Studios President Kevin Feige loved the show.

So, naturally, when a teaser poster hits the web for a potential upcoming show starring Hell Kitchen's resident devil, it turns heads.

IS A DAREDEVIL SHOW ON ITS WAY?

Famous concept and fan artist BossLogic made waves by releasing a poster that seemed to tease a project involving Daredevil and Disney+:

As seen above, the poster is an exciting one–creative as well. The legitimacy of it didn't last long, as the actor behind the Kingpin himself, Vincent D’Onofrio, took to Twitter to respond, simply saying that it's "Def not legit:"

SO, IS THE DAREDEVIL SHOW REAL?

The short answer is no. There is no announced or rumored Disney+ Daredevil show in the works. The confusion mainly stems from an attempted April Fool's joke done on March 31.

The infamous "holiday" of April 1 is one that is known for its gags, and in this case, fake confirmations and news passed off as fact. Here, it would seem that BossLogic missed his mark by a day. Needless to say, it's not the most productive of holidays.

That isn't to say that the idea of a Daredevil Disney+ show isn't tempting. Fans miss Charlie Cox's portrayal of the man without fear, and the sooner he is seen again, the better. With his appearance heavily rumored for Spider-Man: No Way Home, and plenty of opportunities to show his face in She-Hulk, fans might not have to wait long to see the red devil once again.