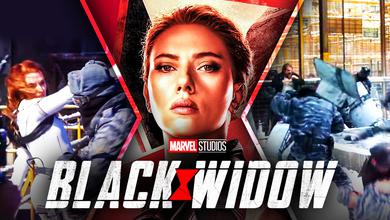 After multiple delays, Black Widow will finally open the movie branch of the MCU's Phase 4 this July. Set after the events of Captain America: Civil War, the film will showcase the first solo adventure of Scarlett Johansson's Natasha Romanoff.

The prequel was supposed to start the post-Infinity Saga chapter of the MCU, but the pandemic ultimately derailed that plan.

After numerous reports and rumors, Black Widow finally landed a July premiere date that is accompanied by a hybrid release strategy on both Disney+ and in theaters.

Plot details of the film are still being kept under wraps, but marketing already revealed that it will revolve around Natasha Romanoff's mission to take down the Red Room while also reuniting with her Russian family.

Now, a fresh look at the film has surfaced.

A BEHIND-THE-SCENES LOOK AT BLACK WIDOW

In the video, Scarlett Johansson teased that the upcoming MCU movie is "something the Marvel universe has never experienced before."

Florence Pugh, who plays Yelena Belova in the film, said that all the fighting in Black Widow is “so emotional and about not knowing how to say what you feel.”

Johansson then pointed out that the project features “some of the most intense fights we've had in the MCU.” Meanwhile, David Harbour was in awe of a particular prison sequence involving 400 extras while Rachel Weisz said that Black Widow “doesn't feel like a movie” since “it feels real.”

The featurette can be viewed below:

The featurette provides many insights on how Black Widow will stand out from its predecessors.

For starters, the video highlights the thrilling action set pieces of the film that will further be elevated due to its conspiracy-heavy plot. This is on top of Scarlett Johansson's comment about the film having “some of the most intense fights” of the franchise.

David Harbour's confirmation that there will be a prison break sequence in Black Widow should give fans a hint on how Natasha Romanoff and Yelena Belova will help Red Guardian in the film. Given that Romanoff is already on the run due to the Sokovia Accords, it seems that the hero is embracing her status as a fugitive by doing whatever it takes to succeed in her mission to take down the Red Room.

The concept of family has been confirmed to be the main focus of Black Widow, and it looks a new layer of Romanoff's character will be unveiled during the film. This marks the first time that an in-depth look at the hero's past in the Red Room will be chronicled, and it will potentially shed some light on her mindset heading into the last two Avengers films.

A good chunk of Black Widow is expected to revolve around the sisterly bond of Romanoff and Yelena, and their dynamic will likely serve as the launchpad of future stories for the two characters. Romanoff will use her experience in the prequel to boost her morale for the final stand against Thanos while Yelena could likely take the Black Widow mantle after her sister's death in Endgame.

The scene where Romanoff hugs an unconcious Yelena presumably after the final battle could send mixed signals about the latter's MCU future. While it's unlikely that Yelena will meet her end in Black Widow, this could tease that a tragic or villainous future could be in store for the character.

It's possible that a shady organization like the Red Room or even Julia Louis-Dreyfus' secret spy group could hide the truth behind Yelena, thus leading to a surprise reveal in a future MCU project like Hawkeye or even Avengers 5.

Whatever the case, fans will find out when Black Widow premieres on Disney+ and in theaters on July 9, 2021.