Black Widow: MCU Events from the Spy's Secretive Past That Her Solo Movie Could Explore

Since Natasha Romanoff was first introduced in the Marvel Cinematic Universe in 2010 in Iron Man 2 , there has been no shortage of Easter eggs regarding her shady past. As said by the Black Widow herself in The Avengers , "I've got red in my ledger." How much red, though? Also, while we're asking the tough questions, what happened in Budapest, what exactly is Black Widow's connection to The Winter Soldier, and what does Natasha's parentage look like?

Luckily, a few of these questions are bound to be answered in Black Widow , the kick-starter to Phase 4 of the MCU that hits theaters Nov. 6, 2020. Still, there's only so much Marvel Studios can cram into one film. So, let's take a look back at some pivotal moments in the MCU that gave us insight into the life of Natasha Romanoff — some of which never even made it to the big screen.

2012's The Avengers is the first time viewers catch a glimpse into the backstory of the Russian spy, mainly due to Loki's quickly-turned interrogation onto her. With top-secret information given to him by mind-controlled Clint Barton, Natasha's Strike Team D.E.L.T.A. partner and best friend, Loki ambushes Natasha with the sins of her past. These sins include "Dreykov's daughter," "São Paulo," and "the hospital fire." Interestingly enough, it was recently confirmed that Ray Winstone is playing Dreykov, the head of the Red Room, in Black Widow . The only other mention of Dreykov is in Black Widow prelude comic #1: 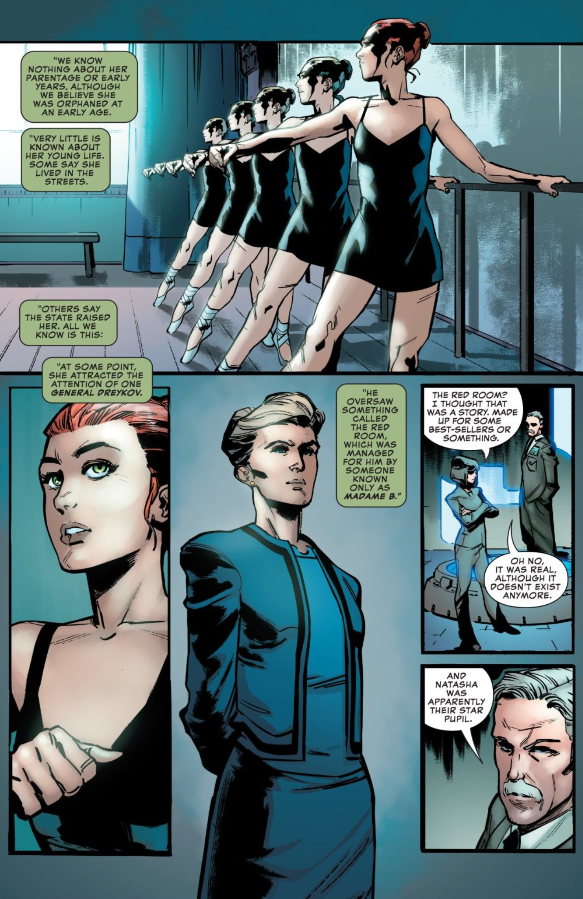 One can only assume that Black Widow will provide a more concrete explanation of Dreykov's involvement in Natasha's life. Maybe Dreykov and his daughter are related to the pivotal Budapest mission that's been alluded to multiple times throughout the MCU. This mission definitely involves Natasha and Clint, and with Black Widow also having been confirmed to film in Budapest itself, it may finally all come together later this year. Fans could know if the Battle of New York really was like Budapest.

In the same interrogation scene between Natasha and Loki, we also find out how Natasha made her way from the KGB in Russia to S.H.I.E.L.D.. Natasha tells the God of Mischief that Agent Clint Barton was sent to kill her, but instead recruited her to Marvel's most infamous agency. However, this clashes with how others recall Natasha getting into S.H.I.E.L.D., but more on that later.

When Steve Rogers begins searching for the suspect who (supposedly) assassinated Director Nick Fury in 2014's Captain America: The Winter Soldier , it's Natasha that gives him his first clue. She tells Steve how she came across an assassin known as The Winter Soldier during a mission in Odessa when she was tasked with transporting a nuclear engineer out of Iran. Natasha mentions it happened five years ago — 2009, to be exact, right before the events of Iron Man 2 .

Marvel Studios Chief Creative Officer Kevin Feige said that in Black Widow , fans will see that, "[Natasha has] been up to a lot all along - in between when we see her in the other movies - some of which will be surprising to people." It's possible we may get to see what exactly went down in Odessa, and how Natasha tried to track down The Winter Soldier herself, as she also mentions to Steve. 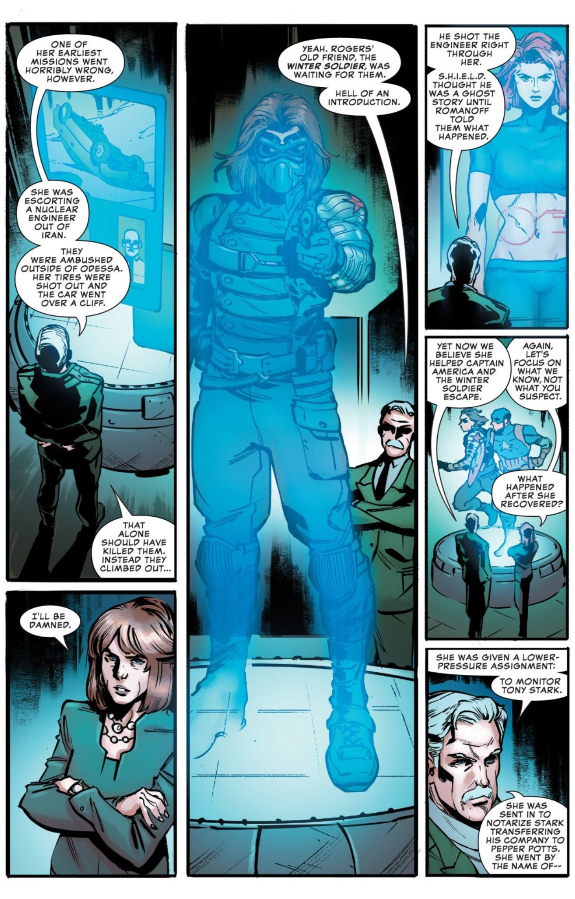 With that, we could also see some stronger connections between Natasha and The Winter Soldier, Bucky Barnes. In the comics, the two share a past together in the Red Room, where Bucky served as her trainer in the KGB-run program. Eventually, this leads to a modern-day romance between the two. Though obviously not present in the MCU, Natasha does plead to Bucky when he's strangling her in Captain America: Civil War , "You could at least recognize me."

Could this mean Black Widow and The Winter Soldier actually do have a history, apart from him shooting her long, long ago? Sebastian Stan hasn't been confirmed to reprise his role as Bucky for Black Widow , but we do know that Marvel Studios loves to keep hidden surprises up their sleeves.

Perhaps the biggest clue we get into Natasha's backstory is in Avengers: Age of Ultron when the Scarlet Witch puts Natasha under a spell that takes her back to her Red Room days. Though only seen in brief glimpses, we see how Natasha was trained in the elegant-turned-deadly art of ballet, and that her "graduation" from the Red Room involved her undergoing a procedure that resulted in her never being able to have children. 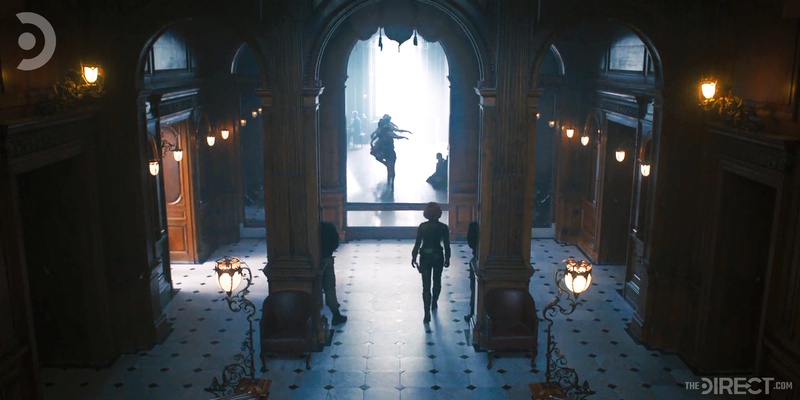 Through these glimpses, we also get a look at a new character from Natasha's past: a woman known as Madame B. Said to be a supervisor in the Red Room and trainer to Natasha, Madame B is shown to be the one who forces Natasha into undergoing a sterilization procedure and employing her into the world as the Black Widow. Rumors have circulated regarding if Madame B will make an appearance in Black Widow , considering a supposed major plotline of the movie is Natasha attempting to end the Red Room for good.

Madame B coming back isn't entirely implausible. Natasha was born in 1984 in the MCU, putting her in the Red Room some time in the nineties, so it's likely Madame B hasn't bitten the dust quite yet. If Natasha does make her way back to the Red Room, it'd be interesting to see how she would react when she comes face-to-face with her old mentor.

One of the greatest mysteries of Natasha's past is the question of who exactly raised her. In a deleted scene between Natasha and Steve that serves as a brief continuation of their talk in the church following Peggy Carter's funeral in Civil War , Natasha discloses some personal information. After S.H.I.E.L.D. fell in The Winter Soldier , Natasha went back to Russia to find her parents, only to come across two gravestones. Check out the full deleted scene below:

So, there you have it: Natasha's parents are dead. However, jump forward a few years to Avengers: Endgame , and Red Skull calls Natasha "Daughter of Ivan" when she and Clint head to Vormir to find the Soul Stone. One would assume that Ivan is Natasha's dead father, but in actuality, Ivan is the man who saved Natasha from a burning building when she was a baby — if we're going by comic book lore. From there, Ivan ushers the young Natasha into the Red Room, ultimately leading her to become the assassin known as the Black Widow.

It's safe to say this makes Natasha's family history a bit shaky, as she mentions to Clint after the fact that she herself didn't even know the name of her father. Even so, Scarlett Johannson, who plays Natasha Romanoff, mentioned that her solo film will heavily touch on the theme of family , answering important questions such as:

Now, this "family" of hers isn't likely to be biological. Instead, we'll be seeing a family of super spies in Black Widow , such as Florence Pugh's Yelena Belova, a Black Widow sister of the sorts, and David Harbour's Alexei Shostakov, another father figure to Natasha. Though not related by blood, the ties that bind them are sure to hold weight to the foundations that make up the Natasha Romanoff we currently know in the MCU.

With every Marvel film released, there are also typically one or two comic books put out called "Marvel Cinematic Universe Official Tie-Ins" that act as mini-prequels to the film. For Black Widow , two such comic books were released. In them, General Thaddeus "Thunderbolt" Ross is attempting to convince Councilwoman Hawley (the same councilwoman that Natasha impersonated in The Winter Soldier to take down Alexander Pierce) to start a manhunt for Natasha Romanoff.

The books take place during the same timeframe as Black Widow does: after Civil War , but before Avengers: Infinity War . Thus, Natasha is still wanted for letting Captain America and The Winter Soldier escape during the airport battle in Germany.

During the course of the discussion, we get a few more tidbits into Natasha's life, such as more of her Red Room upbringing and, once again, rumors of how she got into S.H.I.E.L.D. Contrary to what Natasha told Loki in The Avengers , General Ross instead details three possible scenarios he's heard of: 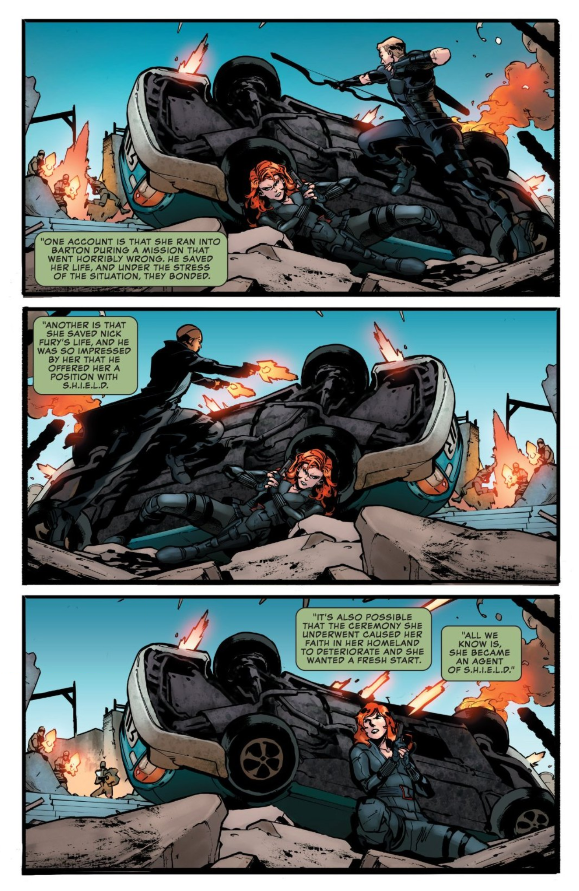 Though it's probably safe to assume that what Natasha told Loki is, in fact, the way things went down when she defected from the KGB, it's odd that there are multiple versions of the story floating around. This could be implying that, despite all of her established years in the United States and at S.H.I.E.L.D., Natasha Romanoff remains a mystery to almost anyone.

All in all, there's no doubt that Natasha Romanoff remains one of the MCU's most mysterious characters to date. Though it took a year or two (or ten) for her to get a standalone film, the wait is surely going to be worth it. The above mentioned Easter eggs and hints have set up what is bound to be a Marvel movie unlike no other. We'll be getting, arguably, the most in-depth look yet at a Marvel heroine, and it seems only right that that character is Natasha after she helped save our beloved MCU.