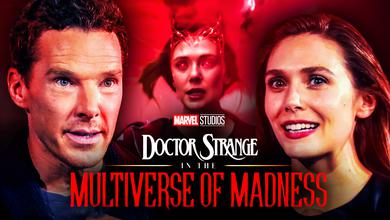 With WandaVision coming in as Marvel Studios' first effort into storytelling on Disney+, it seems only natural that its run continues to be the subject of analysis in relation to its MCU companions. This is especially the case considering how often Marvel Studios President Kevin Feige has spoken of the show's inevitable ties with 2022's Doctor Strange in the Multiverse of Madness.

While Benedict Cumberbatch may not have shown up in the Disney+ exclusive series, he will be teaming up with somebody who did: Elizabeth Olsen, who has portrayed Wanda Maximoff since 2014's Captain America: The Winter Soldier. After taking on the lead role in WandaVision, her role in the MCU is about to move to new heights with a co-starring appearance alongside the Sorcerer Supreme.

As it turns out, her work in the streaming world made quite the impact on her new magical big-screen partner.

MCU star Elizabeth Olsen spoke with Rolling Stone about her experience in both of her Phase 4 projects, specifically in relation to her new co-star, Benedict Cumberbatch. The two are set to reprise their roles as Wanda Maximoff and Doctor Strange respectively in 2022's Doctor Strange in the Multiverse of Madness.

According to Olsen, Cumberbatch had "really positive things to say" after seeing her work on WandaVision, which debuted on Disney+ in early 2021. Admitting that she was "a little nervous" about not being able to transition between both projects easily, Olsen shared how Cumberbatch told her that Wanda is experiencing "this perfect journey" throughout both entries:

"He had really positive things to say about how the show ended up. They showed it to him, I think, before it all aired. I didn’t really know what was happening in Dr. Strange until just before we got back to shooting [the film] during the pandemic in September. That was my first time getting to hear my role. And I was a little nervous that I wouldn’t be able to change certain things in WandaVision in order to support what’s going to happen in Dr. Strange. For any actor, that lack of control can be tough. But he said it is really this perfect journey that you watch her go through, in order to be invested in Dr. Strange, too. So that made me feel good, because I do feel that way myself. I feel we’ve managed to make it make a lot of sense."

Olsen revealed that her work on WandaVision "made [her] feel more confident playing" the character, feeling that her "instincts [were] right" as she moved to the Doctor Strange sequel.

Speaking of how she talked about her journey with WandaVision head writer Jac Schaeffer, Olsen said it was "really satisfying with this whole project" while looking ahead to Wanda's next moves. Olsen and Schaeffer connected quickly as "the answers that [she] had in [her] head" came right to Schaeffer as well during their discussions:

"WandaVision also made me feel more confident playing her. Working on Dr. Strange immediately after, I just feel like my instincts are right. It feels the way you want to feel all the time, which is kind of hard when you have such little screen time and everything that’s happening not on the page is in your head and not in the writer’s head. But what was really satisfying with this whole project was when Jac was pitching it to me, it was as if the answers that I had in my head just as an actress somehow magically made it to her brain without me having to verbalize them to her."

NERVES CALMED FOR THE SCARLET WITCH

More fans of WandaVision continue to come from the shadows nearly every single week, including one of the MCU's most prominent on-screen stars of Phase 4.

Nearly immediately after finishing work for her first Disney+ show, Olsen joined Cumberbatch on set for the highly-anticipated sequel to 2016's Doctor Strange, which truly introduced magic to the MCU for the first time. Although this show was her sixth time playing the character, it's clear that Cumberbatch helped her gain even more confidence in herself going into likely her biggest MCU movie role to date.

While it's unclear how much screen time Wanda will have in the 2022 movie alongside Doctor Strange, Cumberbatch's support seemed to help her bring the portrayal to another level as she continues her MCU journey.

The two technically haven't shared any scenes together after both appearing in Avengers: Infinity War and Avengers: Endgame, but the powerful MCU magicians will make up for that in a big way next year. With head writer Jac Schaeffer helping push the Scarlet Witch's story, Wanda Maximoff is likely in for a huge role as she and Doctor Strange dive headfirst into the madness.

All nine episodes of WandaVision are available to stream on Disney+. Doctor Strange in the Multiverse of Madness will debut in theaters on March 25, 2022.