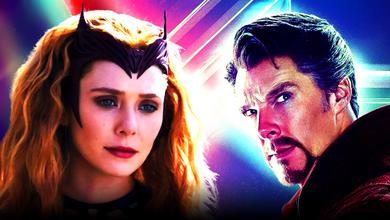 As WandaVision came to a close, the post-credits scene teased that Wanda Maximoff would be dipping her toes in the water (or diving headfirst) into the realm of Dark Magic as she scrolled through the pages of the Darkhold. This will only spell trouble for her and anyone else involved, and will likely require the intervention of a certain Sorcerer Supreme to keep things in order.

It’s been known since the show's initial announcement that WandaVision would tie into the next Doctor Strange movie, Doctor Strange in the Multiverse of Madness. However, it seems that not everyone was on the same page regarding exactly which elements of the Disney+ series would carry over to the Doctor Strange sequel.

In fact, it seems that even the Scarlet Witch herself wasn’t sure what the next step was after WandaVision until she was in the final stretch of filming her debut Disney+ series.

ELIZABETH OLSEN IN THE DARK

In an interview with the Awards Chatter podcast, WandaVision star Elizabeth Olsen lightheartedly admitted that she “wished that there was a plan” for her inclusion in Doctor Strange in the Multiverse of Madness that “someone (would have shared) with her a little sooner.”

“I really wish that there was a plan that someone shared with me a little sooner. (laughs) I found out about Doctor Strange 2 and what the story was before we went for the last 8 weeks of filming WandaVision during the pandemic. I found out in, like, August, and then I wrapped WandaVision on a Wednesday and went to England (that) Friday.”

Olsen also casually mentioned that she’s finally returned from England, where she had resided since last Fall for the production of the Doctor Strange sequel.

Everyone knows that Marvel keeps their plans close to the vest, but to hear that even Elizabeth Olsen wasn’t aware of the extent of her role in Doctor Strange 2 is a bit puzzling. This is particularly intriguing considering her Disney+ series was meant to lead right into the film.

This begs the question of just how important Olsen’s Scarlet Witch really is to Doctor Strange in the Multiverse of Madness. However, if she’s just now returning home from her work on that film, then it’s safe to say that her character will be pretty heavily involved.

In fact, Olsen’s hindsight on the film is curious. Since she wishes she had known the details of her role sooner, that may tell fans that this film required a lot more of Olsen than what she is used to in her typical MCU work.

The actress did recently state that she has been kept to multiple shorter contracts with Marvel Studios over the years. It's also apparent that her level of physical involvement in past Marvel installments has been rather minimal compared to other MCU alums like Chris Hemsworth and Brie Larson. This may indicate that fans will get to see more Scarlet Witch action in Multiverse of Madness than ever before.

If Marvel Studios wasn’t even willing to share the details of the Sorcerer Supreme’s next big MCU outing with one of its lead stars, then the real question in play is just how pivotal this movie will be to the greater Marvel Cinematic Universe. Fans already know it’ll contain Scarlet Witch in some capacity, but Doctor Strange is also set to appear in Spider-Man: No Way Home this December, planting a mystical seed in yet another MCU franchise that is not his own.

There is still plenty of time for the several MCU projects set to release before March 2022 to create more problems for Doctor Strange to deal with, and the amount of work that Elizabeth Olsen had to put I to the upcoming film could be an indicator that she, too, will have a lot on her MCU plate next spring.