Gorgeous 'Batman: Into the Bat-Verse' Fan Poster Copies Spider-Man In the Best Way

Almost no characters from the world of comics are more popular than Marvel's Spider-Man and DC's Batman, both of whom boast incredibly vast legacies and casts of supporting characters. They've also both made their mark on film over the past year, with The Batman becoming DC's biggest post-pandemic project and Spider-Man: No Way Home ranking as the sixth-highest-grossing movie ever.

These are also two characters with heavy ties to their respective Multiverses, which is about to become even more real over the next couple of years. Next year's The Flash will bring two different versions of Batman played by Ben Affleck and Michael Keaton, and even outside of Spider-Man: No Way Home, Sony also has Spider-Man: Into the Spider-Verse and its sequel with dozens of different Spidey Variants.

And now, thanks to a fun piece of fan art, New York's web-slinger and Gotham's Dark Knight have even teamed up in a unique way for fans to enjoy.

Into the Spider-Verse Meets Batman

Artist Lyle Cruse shared a piece of art that depicts the characters from Spider-Man: Into the Spider-Verse dressed as Batman characters. Including the "anybody can wear the mask" quote from the movie, this photo mashes up the Marvel characters with DC's iconic heroes and villains and uses the title "Batman: Into the Bat-Verse:"

“Anyone can wear the mask.” Thought of this and had to make it. Bruce B. Wayne, Batgirl, Robin, Bat-mite, Gray Ghost, Carrie Kelley, Bat-mech, Commissioner Gordon, Ala’fred, Poison Ivy, Death Stroke, Bane. Who am I missing?"

The photo features Peter B. Parker as Batman, Miles Morales as Robin, and Gwen Stacy as Batgirl. Behind them are characters like Jefferson Davis as Commissioner Gordon, Olivia Octavius as Poison Ivy, and even Bane as Kingpin.

For reference, the characters from Into the Spider-Verse can be seen below in their natural universe from Marvel: 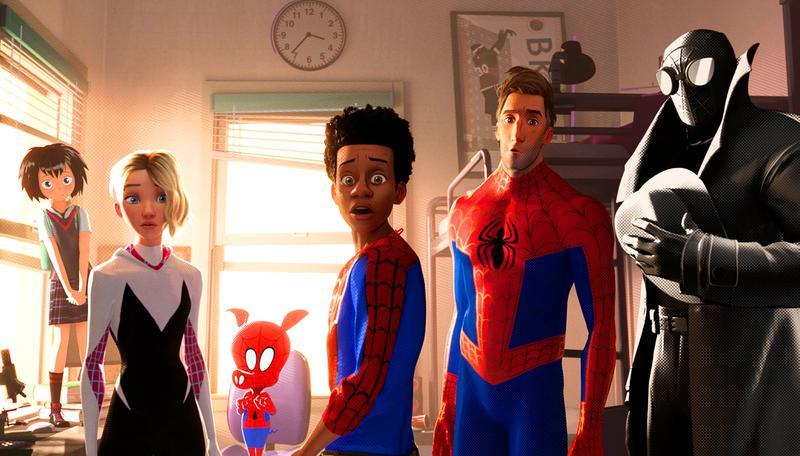 Being the two top comic book and comic-book movie companies in the game, Marvel and DC always find a way into similar conversations amongst fans. This one adds a fun twist for those who enjoy both franchises, especially with the Batman story featuring so many characters that can be utilized across multiple realities.

Warner Bros. has brought adventures similar to this imaginary one with movies like The LEGO Batman Movie, although it's something completely different than Into the Spider-Verse. The studio could certainly make an animated story like that one, although there's no telling if or when those plans could actually go into place.

For now, this piece of art gives fans something fun to imagine with crossovers like Peter Parker/Bruce Wayne and Miles Morales/Robin, even bringing plenty of laughs with characters such as Spider-Ham dressed in a Batman outfit.

Spider-Man: Into the Spider-Verse is available for home viewing, as is The Batman.